Yesterday saw the news that director Matt Reeves has cast Zoe Kravitz as Selina Kyle, aka Catwoman, in the upcoming The Batman movie, which sees Anne Hathaway and Jason Momoa respond.

Anne Hathaway, who played the character for Christopher Nolan in The Dark Knight Rises, posted on Instagram: “The biggest congrats to Zoe Kravitz on landing the role of a lifetime. Well, one life anyway…⁣⁣ Enjoy the ride, Selena.”

Jason Momoa is actually the step-dad to Zoe Kravitz, as the Aquaman actor is married to her mother, Lisa Bonet.

“I’m so proud of u zozo bear. On and off screen OHANA. DC WB ohana Lola and Wolfies big sister is CAT WOMAN. Unbelievable so freaking stoked. Your going to have so much fun Aloha P bear,” he said.

The biggest congrats to @zoeisabellakravitz on landing the role of a lifetime. Well, one life anyway…⁣⁣ Enjoy the ride, Selena — #Catwoman 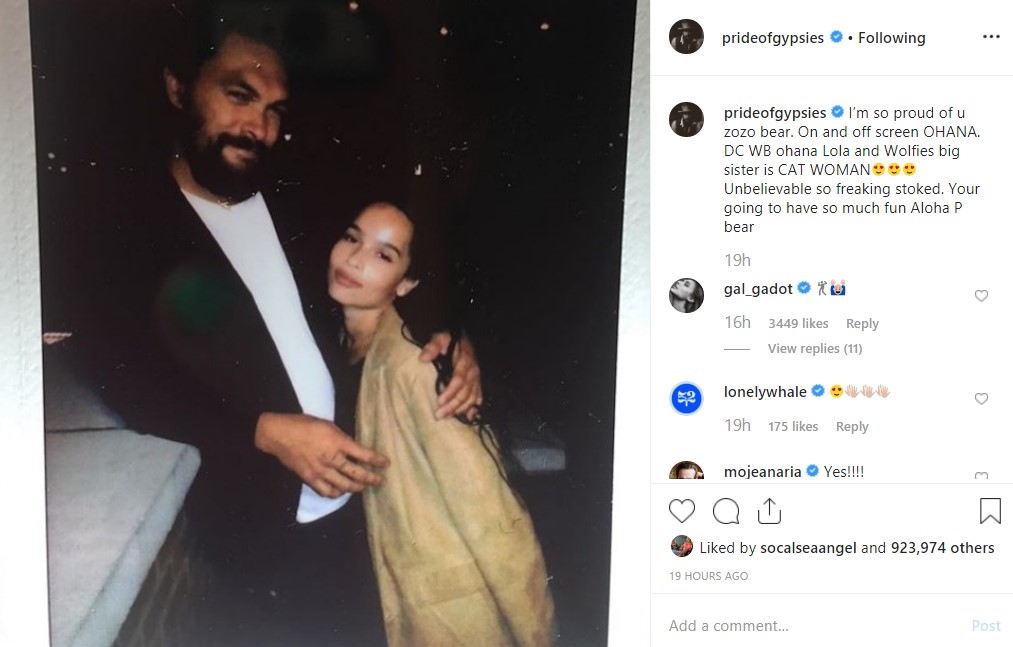 Zoe Kravitz is Catwoman in The Batman

Catwoman details in The Batman are slim, but the character was previously rumored to be a villain along with Penguin, Riddler, Mad Hatter, Firefly and Two Face.

I exclusively revealed that director Matt Reeves would be using more villains than the rumored six and would be in part adapting the DC Comics “The Long Halloween” storyline, which Kevin Smith confirmed as well.

“The Long Halloween” comic book sees Falcone trying to get Bruce Wayne to launder money, which Bruce refuses, so he goes off to investigate as Batman and discovers Catwoman, his on/off girlfriend, is investigating as well.

The Batman has a June 25, 2021 release date starring Robert Pattinson as the titular character, Jeffrey Wright as Jim Gordon, Jonah Hill in talks for a villain role; said to be Penguin or Riddler, with the plot of the movie rumored to be exploring a detective case where people start dying in strange ways so Batman must go deep into the dark world of Gotham City to find the clues and solve the mystery/conspiracy connected to Gotham City’s history and criminals.