Similar to Mark Hamill, Andy Serkis once again speaks out against Kathleen Kennedy and Rian Johnson's Star Wars: The Last Jedi, and the death of his character Snoke.

While J.J. Abrams built up mystery surrounding Snoke in Star Wars: The Force Awakens, Kennedy and Johnson, for some reason, decided to throw that all away and kill off the character, which was a disappointment to a lot of fans.

Talking with EW.com as part of their "Couch Surfing" interview series, footage of Snoke was shown to Serkis, which saw him cringe. Serkis remarks on how his brother is a huge fan of Star Wars and that he was excited to get the role for him.

"In many ways, I was glad I got the role for him," he said and then pointed to the footage of Snoke. "And so cruelly disposed of so early in his career, Supreme Leader Snoke, I got to say. I mean come on."

The interviewer remarks there are so many questions surrounding the character.

"I know. Tell me about it," says Serkis.

The interviewer then asks if there could be a reappearance in the upcoming Star Wars: Episode IX.

"Look. It's a Star Wars movie. Anything can happen," Serkis offers. "Again. I am saying this with the hope that someone is listening out there. But... [laughs]." 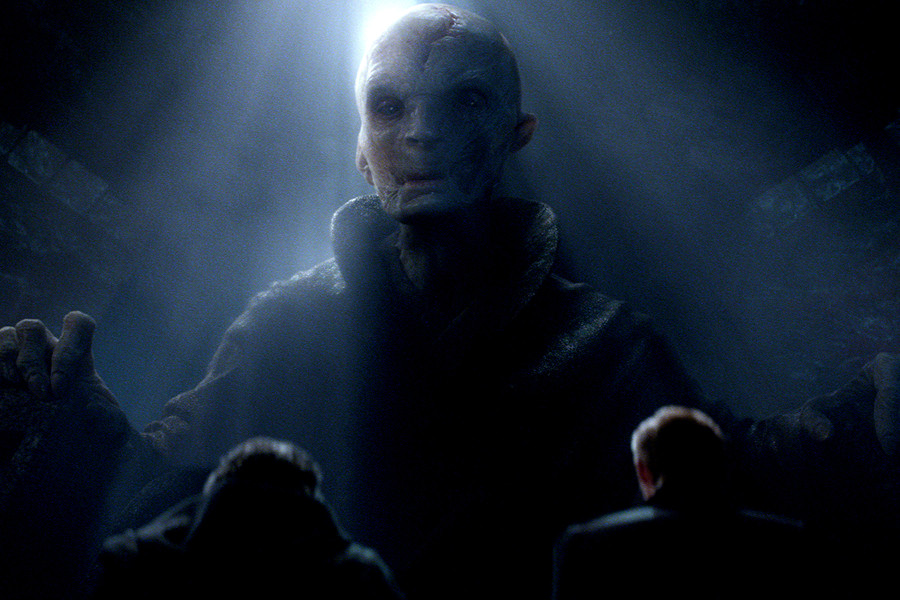 Back in March also saw Serkis speak out about what happened to Snoke in The Last Jedi.

"It’s a great character, and I’d be keen," Serkis told THR about returning to the role. "I know it frustrated a lot of people that Snoke came to such a sticky end so quickly... but yeah, I could quite happily — I’d be very happy to extend Snoke’s life for sure."

Regarding Mark Hamill, he actually came out and said it wasn't "his" Luke Skywalker in The Last Jedi.

"I said to Ryan, I said, 'Jedi's don't give up. I mean even if he had a problem he would maybe take a year to try and regroup, but if he made a mistake he would try and right that wrong,'"  Hamill said after The Last Jedi. So right there we had a fundamental difference, but it's not my story anymore. It's somebody else's story, and Ryan needed me to be a certain way to make the ending effective. That's the crux of my problem. Luke would never say that. I'm sorry. Well in this version, see I'm talking about the George Lucas Star Wars. This is the next generation of Star Wars, so I almost has to think of Luke as another character. Maybe he is Jake Skywalker. He's not my Luke Skywalker, but I had to do what Ryan wanted me to do because it serves the story well, but listen, I still haven't accepted it completely. But it's only a movie. I hope people like it. I hope they don't get upset, and I came to really believe that Ryan was the exact man that they need for this job."