Echoing my own thoughts about Taskmaster in the recent Black Widow trailer, a lot of fans are hating what they see as well DC Comics writer Gail Simone.

I wrote how the new Black Widow trailer is goofy and too over-the-top and said the Taskmaster costume doesn’t look any good.

Fans on social media agree, with DC Comics writer Gail Simone even offering her own disappointment.

“I am disappoint,” Simone tweeted about Taskmaster in the trailer. 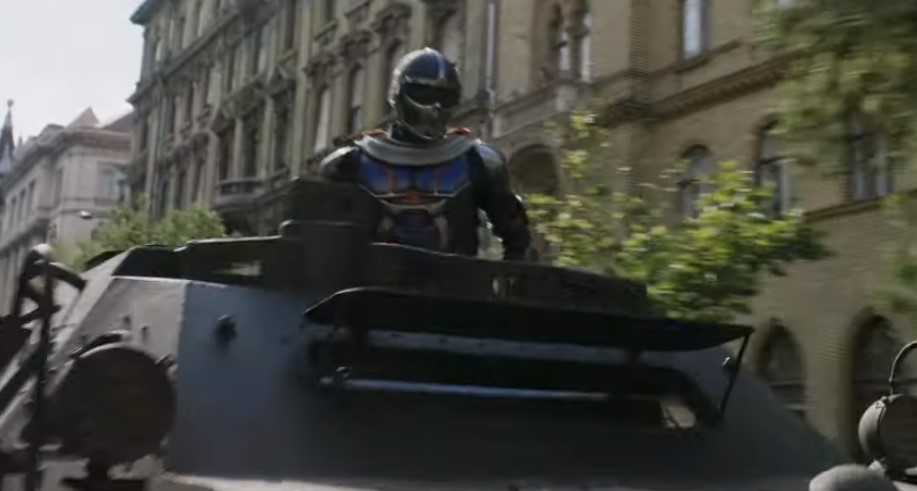 He looks designed to fight this version of Cap pic.twitter.com/GVK4QsQjbJ

He looks like hes ready for a national paintball tournament

Another fan offered a fix for Taskmaster in Black Widow:

It would be so easy to fix. pic.twitter.com/wk84n76If4

A fan even compared the situation to Sonic The Hedgehog which saw the studio go back and fix the design for Sonic after fan reaction:

Cab the internet complain enough about Task Master that they’ll change his appearance? Pull a Sonic! 😀

Came here to say this. Thank you.

UDON Taskmaster redesign is literally a perfect concept for the MCU. Why didn’t they just follow it.

Because they are appealing to the China market with no skulls. I mean, I get it but he still looks like Lord Zedd pic.twitter.com/I8DTisDqCl

Motocross Power Ranger isn’t what I wanted to see, but I don’t think anyone’s getting Marvel to cave on this. I don’t think Tasky has the same level of fan support as Sonic.

Is taskmaster a big paintballer?

I think the issue isn’t that it doesn’t look exactly like in the comic books but that the MCU design looks kinda boring and unimaginative. :/

I would have maaaybe accepted this for Agents or SHIELD, but less so for a film set in the MCU.

the film looks like the banalest cookie-cutter outtakes from all their other movies. seriously, Taskmaster looks like a reskinned Crossbones. Widow doing the Iron Man landing? Doing the Spider-Man dive. Common she is her own character, not a copy cat.

Ah, continuing the tradition of cinematic appearances having the barest relation to comic book designs. I was a fool to expect a skull mask and dayglow orange accents.

I mean just look at that archery and the arrow being on the wrong bloody side of the bow
Of course he’s going to lose if he can’t even hit basic standards of technique.

If you didn’t know that was Taskmaster, you wouldn’t know it was Taskmaster based on the costume, It looks like they’re trying for the design used in the Marvel’s Avengers game, but without the hood or skull (the skull is hinted at, but that’s it). It’s disappointing.