Disney and LucasFilm come up short in another episode of The Book of Boba Fett as it's more of the same from the previous chapters--rushed garbage that completely changes the character that fans want to see.

While, admittedly, I did enjoy this episode, which could simply be because the previous three were so bad, Chapter 4 still comes off with questionable content leaving me scratching my head as to why Jon Favreau and Dave Filoni have taken Boba Fett in this direction, again, from a badass ruthless bounty hunter not afraid to question Darth Vader to some sort of wannabe pacificist guru. 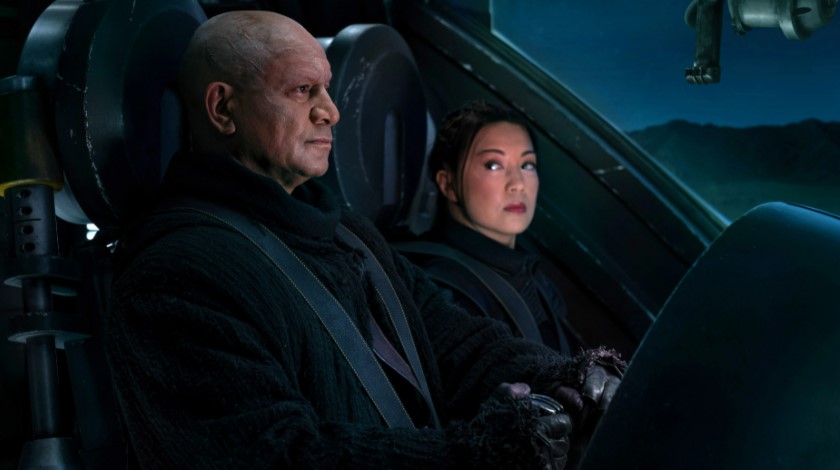 Fennec Shand is the "Boba Fett" we all want to see

The episode starts off from The Mandalorian where Boba Fett finds the mortally wounded Fennec Shand, played by the excellent Ming-Na Wen, who is the "Boba Fett" we all want to see (go figure; Disney for ya).

Now, this is what I wanted to see from the start of the series, a continuation from The Mandalorian. I think the show would have been better off skipping a lot of the Tuscan Raider back story nonsense and keeping it a mystery. How cool would it have been if the show kicked off from this episode and we learned that Boba had indeed escaped the Sarlacc Pit and was found by the Tuscans, but it was only teased? More mystery (and we wouldn't have seen Boba Fett get his ass kicked all the time, and, quite laughably, trained how to fight). Then they could have incorporated some of that stuff in flashback scenes as the series progressed from The Mandalorian.

Honestly, I find the timeline of the show confusing as heck, which I think is also in part due to using Temuera Morrison, who is over 60-years-old, while Boba Fett is supposed to be 35-45 years old(?). Again, I think things would have played out a lot better if they kicked off the series from this episode and progressed from here, as that is the major problem with the show, that it was rushed to give Disney Plus desperately needed content as The Mandalorian is on hiatus, while The Book of Boba Fett suffers due to not being fleshed out. 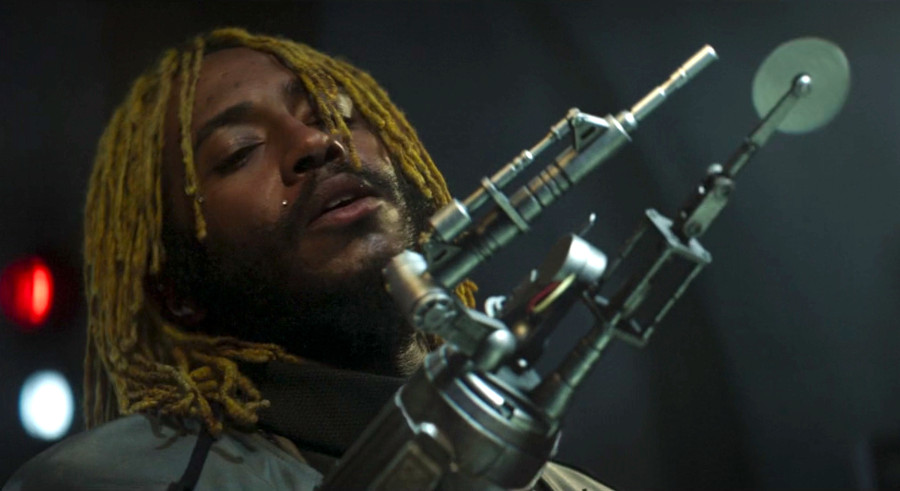 Similar to the last episode with the "Mighty Morphin' Power Ranger Vespas," Chapter 4 gives us another goofy scene that doesn't at all fit with Star Wars, IMO.

I was shaking my head watching Fennec Shand get worked on while the rave(?) music was playing. My first thought was why wasn't a droid performing the surgery? Thundercats, ho, I guess.

At least they didn't give Fennec Shand superpowers from her mechanical additions, like the ability to do a super jump or something goofy like that, though I wouldn't be surprised if they are saving that for another episode. Cringe. And speaking of, how about the goofy little rat catcher robot that looked like it came straight out of a James Gunn movie? The little fragger might be the only one who cares he's "Boba Fett." Hilarious. 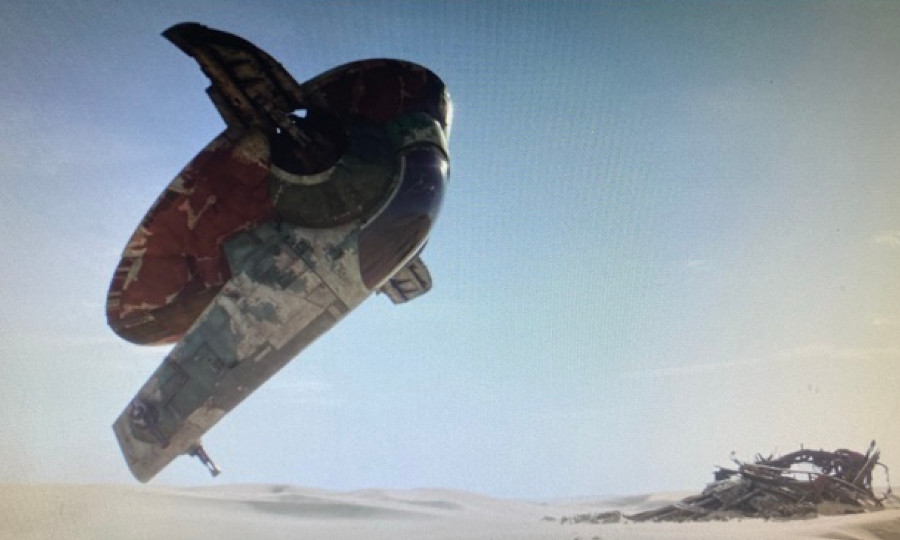 The scenes with Boba Fett, Fennec Shand, and Boba's ship were pretty cool, and how awesome was it to see Boba Fett mow down the bikers? Yes! That's the Boba we all know and want to see!

Did you happen to catch they dropped the Slave 1 name as Boba referred to his ship as a Firespray class ship? Wannabe pacificist guru.

Revisiting the Sarlacc Pit was also pretty cool, but again, I felt it needed to be fleshed out more, as recall how Boba Fett woke with no armor as the Jawas had taken it, but I guess Boba didn't remember that, so he dives headfirst back into the sand monster and doesn't find anything? Okay, at least they explained the use of the Bacta Pod (three episodes later), and I am glad to see it apparently retired (hooray! no more flashback scenes!).

And then, of course, it's Fennec Shand who saves the day by deploying the bomb? Doesn't Boba Fett know how to fly his ship and where his buttons are?

Things would have played out better, IMO, if they didn't show the flashback scenes from the first three episodes. It would have been a lot cooler to see Boba Fett visiting the Sarlacc Pitt first with Fennec Shand and not being able to find his armor and us not knowing what happened, which again would have provided a bit more mystery without all the crappy garbage from the previous episodes that were basically rushed filler to give us an entire season. 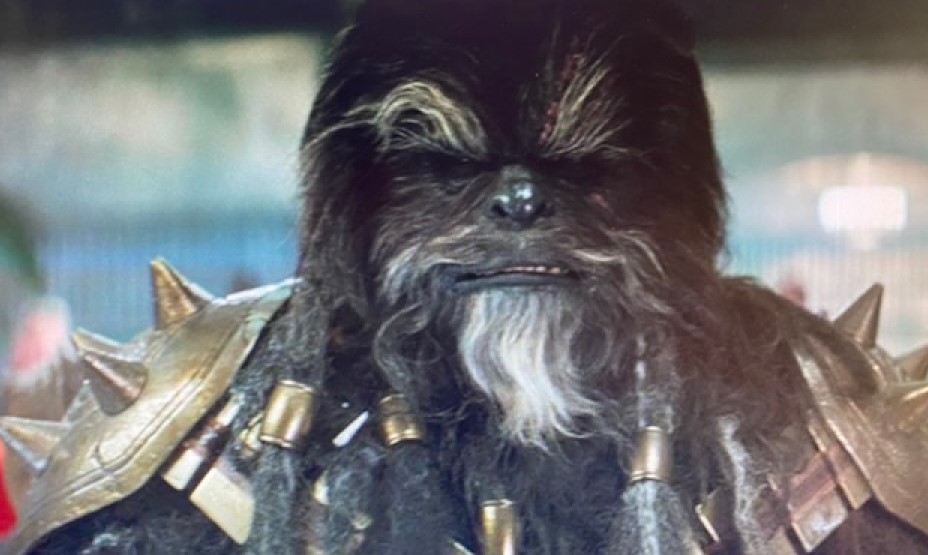 As I predicted (and everybody else) the Black Wookie joins Boba Fett on his quest, and we got a sorta cool scene in the Cantina where the Wookie rips off the arm of a patron, which is obviously a nod to Star Wars.

I like the character of the Black Wookie, so it's good he's sticking around, and similar to Fennec Shand is a complete badass (why isn't Boba?). However, what I found laughable about the scene was that Boba Fett stood there watching the whole time holding his helmet. Why even bring it? It's pointless in the show (spoiler: expect more of the same in The Mandalorian Season 3 with Mando so Pedro Pascal can feel good enough about himself as an actor). 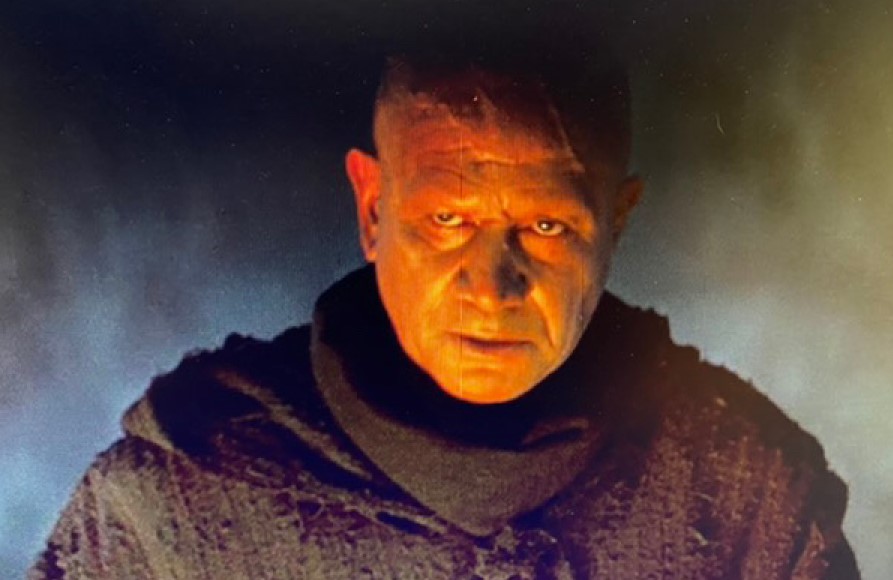 Boba Fett is not a leader but he is rich

A major, major problem with the show, and it's one I am completely not sold on - and again it's because of the previous three episodes - is the notion of Boba Fett being any kind of leader, let alone the leader of a criminal empire.

The dude gets his ass handed to him every episode and no one respects him. I'm at a loss why the crime bosses simply wouldn't bring in twenty guys and completely eradicate him and his four followers. Boba Fett did nothing to instill fear (a locked up Rancor? uh oh!) or respect. No one respects a wuss wannabe pacificist guru.

Then Boba Fett is apparently rich and doesn't need money as he tells Fennec Shand he has all kinds of credits, enough to raise an army? Uh, what? Then why become the leader of a criminal empire? Why try to align yourself with crime bosses?

Ah, I get it, it's to free the people of Tatooine. Become a hero, not a villain.