The Snyder Cut looks to be getting a cool Justice League action figure line as details from a Philippines-based toy company have hit the net.

According to Matt’s Box on Facebook, the Snyder Cut of the Justice League movie will have the following 7-inch action figures released from McFarlane Toys, which includes two 10-inch mega-figures for both Darkseid and Steppenwolf. 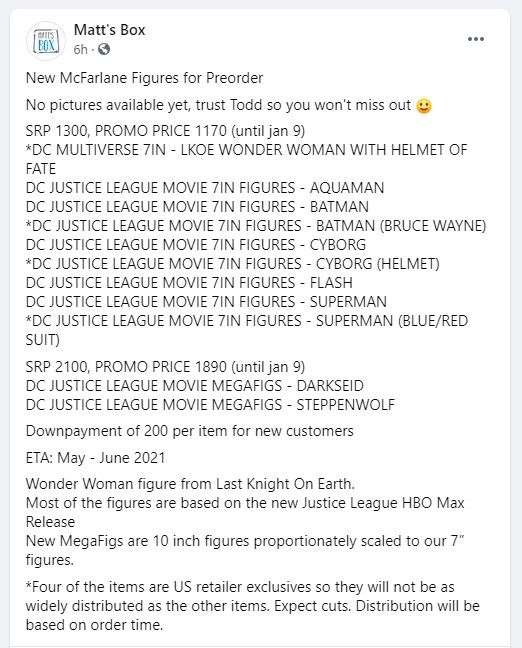 The Wonder Woman action figure listed (a mohawk version) is from the DC Comics limited series Batman: Last Knight on Earth that will start to get released in February and also includes Scarecrow, Omega, and Batman.

The Snyder Cut of the Justice League movie has been said to be getting a March release on HBO Max and stars Ben Affleck as Batman, Henry Cavill as Superman, Gal Gadot as Wonder Woman, Jason Momoa as Aquaman, Ezra Miller as The Flash, with Ray Fisher as Cyborg. Zack Snyder also shot additional scenes involving Amber Heard as Mera and Jared Leto as Joker.

“I am going to try and keep some mystery but I will say that it was fun having a segment of the band together for this little vignette if you will,” said Snyder about the new scenes. “Working with Jared was really amazing. His attention to detail, he really cares a lot about it being awesome. It was fun and everyone did an amazing [job]. And even trying to sugar coat it is a bit of a deal, but everyone brought huge a-game and wanted it to be cool, and I couldn’t be happier with what those guys did. It’s just cool and good fun. It’s fun to do it, you know, for me anyway it was kind of… Look there is pressure to make it cool and all that, but at the same time, on the other hand, it was a complete like… The scene was a thing, a part of the world that I love and that I felt needed to be just added to this movie. It’s really the only thing I added outside the original photography.”