Last night saw it become known that the X-Men and Fantastic Four characters had been removed from the Marvel Universe characters poster.

Now further proof that Marvel is intentionally blocking the use of the X-Men and Fanastic Four comes from the official Facebook pages for the Marvel Mighty Heroes mobile game and Trends International, the official publisher of the Marvel poster.

A user on reddit took the screenshots of the following responses.

You will also obviously notice no X-Men and FF characters on the above Marvel Mighty Heroes image.

Disney seems pretty mum on the subject. I can’t recall any big comic book “news” websites or entertainment “news” websites asking Disney about it other than back in November with Disney’s Alan Fine and Fox’s Jim Gianopulos stating they have no idea. 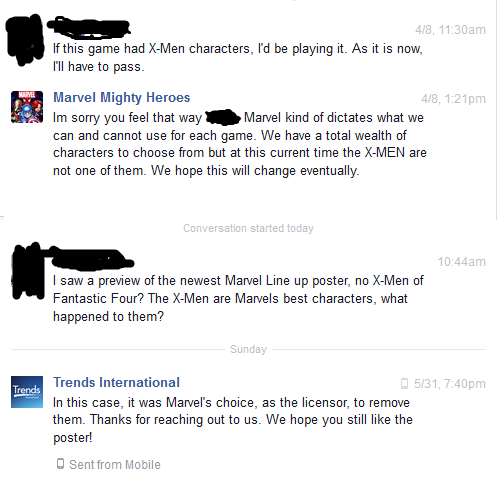