Coming this Friday for Disney Plus Day will be thirteen Marvel movies released in an IMAX enhanced format.

The 13 titles available at launch include the Disney Plus premiere of Marvel Studios’ Shang-Chi and The Legend of The Ten Rings on November 12th as well as other fan-favorite MCU movies like Iron Man, Guardians of the Galaxy, Guardians of the Galaxy Vol. 2, Captain America: Civil War, Doctor Strange, Thor: Ragnarok, Black Panther, Avengers: Infinity War, Ant-Man and The Wasp, Captain Marvel, Avengers: Endgame, and Black Widow (content availability varies by region).

Find the details for Disney Plus Day here.

Director Anthony Russo also made an announcement on Instagram with mention of The Avengers: Endgame, Infinity War, and Captain America: Civil War:

Marvel IMAX Enhanced is coming to Disney Plus

IMAX’s Expanded Aspect Ratio is 1:90:1, which offers up to 26% more picture for select sequences – meaning more of the action is visible on screen, just as the filmmakers intended. In the future, the collaboration will deliver even more enhanced audio and visual technology to Disney Plus, including immersive IMAX signature sound by DTS.

With IMAX Expanded Aspect Ratio, filmmakers can create a more immersive experience in theatres and now in the home, allowing audiences to see more of the action. Marvel fans have long called for more of The IMAX Experience at home, and now with certain IMAX Enhanced features on Disney Plus, subscribers will get what they have been waiting for - additional image at home as intended by the incredible teams behind some of the world’s most popular films.

“For more than a decade, IMAX has helped filmmakers take fans across the Marvel Cinematic Universe in theaters, and now that epic journey crosses into a new world: the home,” said Rich Gelfond, CEO of IMAX. “IMAX, Disney, and Marvel Studios are giving the fans what they want: the most immersive viewing experience throughout the life of a Marvel Studios film, from exclusive theatrical release to the library at-home where they can now watch the Avengers assemble with more picture than ever before.”

“Disney, Marvel Studios, and IMAX have collaborated for years to bring the world’s most popular films to the big screen, and on Friday we’ll start to bring IMAX technology to subscribers with IMAX Enhanced viewing in the Disney Plus app,” said Michael Paull, President of Disney Plus and ESPN+. “We’re thrilled to create new value for Marvel fans and audiences on Disney+, and we’re looking forward to offering even more IMAX Enhanced functionality in the future.” 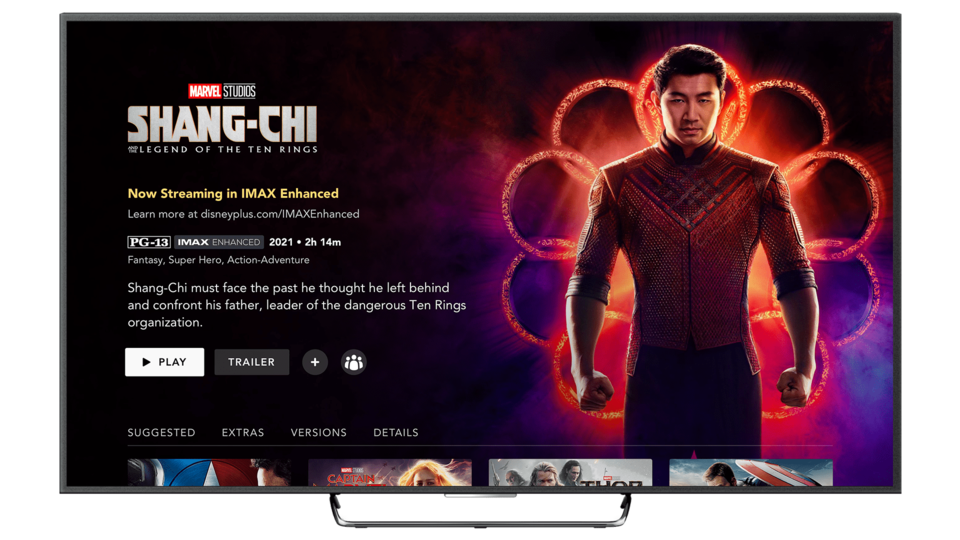 With IMAX Enhanced, IMAX and technology partner DTS will enable content that can be viewed in-home with the highest quality, which ensures that filmmakers’ creative intent is fully optimized for an IMAX-quality presentation. Disney+ is the first major streaming service that will elevate the at-home viewing experience with IMAX Enhanced, rewarding its subscribers with new ways to re-experience the Marvel Cinematic Universe and beyond.

This latest announcement is the latest evolution in the storied relationship between IMAX and Marvel Studios, with audiences first entering the Marvel Cinematic Universe in IMAX in 2010. Avengers: Infinity War and Avengers: Endgame were the first films shot entirely with IMAX digital cameras, and all titles available on November 12th feature select sequences in IMAX’s Expanded Aspect Ratio.