In an interview, while promoting his History Channel Knightfall series, Mark Hamill again comments on Star Wars and echoes a lot of fans' feelings toward what Disney did with the franchise and offers new insights including at times he has been outraged, shocked and tricked, even offering that some things were a big mistake.

Mark Hamill tells Den of Geek that he isn't responsible for creating the stories, he is only a player in the game:

‘I was once describing Star Wars fans, and I said, they’re passionate, they’re opinionated, and they feel a sense of ownership, because they’ve invested so much time in these characters and these stories, and I realised I was describing myself. It can get you into trouble, because I don’t control the storylines. I’m sort of like a musician. I read the music, and I try to play it to the best of my ability. That doesn’t necessarily mean I like the tune, but that’s not my job.’

Hamill continues by revealing Disney chose to go with Mary Poppins Returns for the December 2018 release instead of Han Solo, which is something he didn't agree with (both movies made less than $400 million). Hamill even says Disney can't do much to him now about saying what is on his mind:

‘In our day, it was three years apart. Now they’re two years apart, with an independent movie (Rogue One, Solo) in between. I say to the executives at Disney, “Really? Han Solo five months after our movie? Give it a rest!” They say, well, we have to keep the schedule clear for Mary Poppins.’ He feigns outrage. ‘But I can be mouthy, because you know, what are they gonna do, fire me?’ 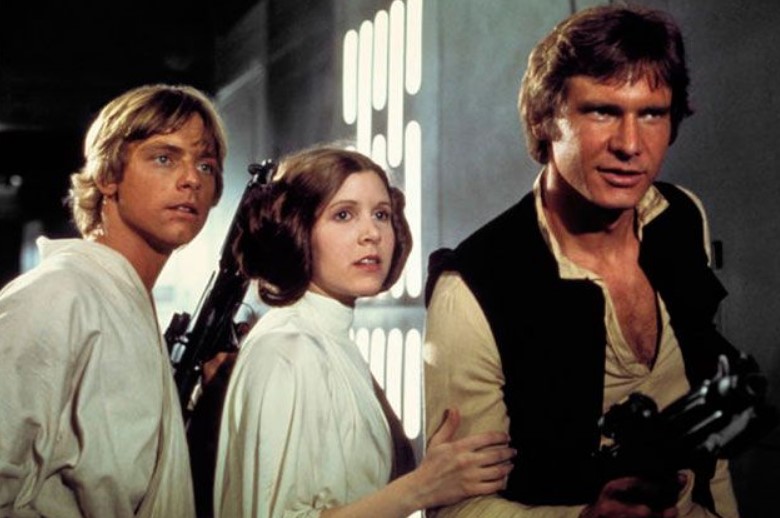 Mark Hamill also comments on a big complaint amongst a lot of fans (and mine) which is that now we will never get to see the original actors reunited on screen, referring to it as a "big mistake."

He remains shocked by Han Solo’s fate: slain by his own son and Luke’s nephew, the powerful Dark Side warrior Kylo Ren (formerly known as Ben Solo) in the sequel trilogy’s opening instalment, The Force Awakens. ‘I just thought, Luke’s never going to see his best friend again. You look at it in a self-centred way. I said that it was a big mistake that those three people would never reunite in any way. I guess I was wrong, because nobody seems to care! I have to stipulate that I care, but it didn’t really seem to affect the larger audience. Luke, Han and Leia will never be together again, and I’ll probably never get to work with Harrison again.

Mark Hamill also once again says he isn't happy that Luke was killed off and offers that Disney tricked him:

Then the second thing was that they killed me off. I thought: oh, okay, you should push my death off to the last one. That’s what I was hoping when I came back: no cameos and a run-of-the-trilogy contract. Did I get any of those things? Because as far as I’m concerned, the end of VII is really the beginning of VIII. I got one movie! They totally hornswoggled (tricked) me.’

Regarding Star Wars: The Last Jedi, Hamill reveals just how clueless director Rian Johnson was about the movie:

‘They had me walking by 3PO, not even acknowledging him. I said: “I can’t do that! He (The Last Jedi’s director, Rian Johnson) said, “Okay, go over and do whatever.” So I went over, and I did whatever. They say it in the script: “Forget the past, kill it if you have to”, and they’re doing a pretty good job!’ Mark Hamill has also previously stated a few other things he hasn't been happy with Disney Star Wars about:

Regarding what Mark Hamill had to say on Luke Skywalker: "I refuse to believe that he's gone," Hamill told the BBC back in March 2018. "My theory is he just teleported to somewhere else and left his robe behind. He teleported to a nudist colony, that's what I'm hoping."

He says he didn't agree with Rian Johnson's approach to Luke in Star Wars: The Last Jedi: