Jeremy Renner is current trending on Twitter with over 15k tweets as The Avengers: Endgame actor has closed his EscapeX app.

Long story short, Renner helped develop an app that would connect “super-fans” to celebrities, but apparently, things have gotten out of control due to trolls, so Jeremy Renner wants the EscapeX app closed for good.

Renner posted on the app:

Goodbye… The app has jumped shark. Literally. Due to clever individuals that were able to manipulate ways to impersonate me and others within the app I have asked ESCAPEX, the company the runs this app to shut it down immediately and refund anyone who has purchased any stars over the last 90 days. What was supposed to be a place for fans to connect with each other has turned into a place that is everything I detest and can’t or won’t condone. My sincere apologies for this to have not turned out the way it was intended. To all the super-fans who have supported me with your words or encouragement, amazing art, stories and time shared on the app, a genuine THANK YOU and I hope to see you on Instagram, Twitter, youtube and facebook. JR

Fans have posted screenshots from the app which shows the impersonations and questionable behavior which ranges from fake Jeremy Renner accounts to fake accounts featuring Jeffrey Epstein and more. 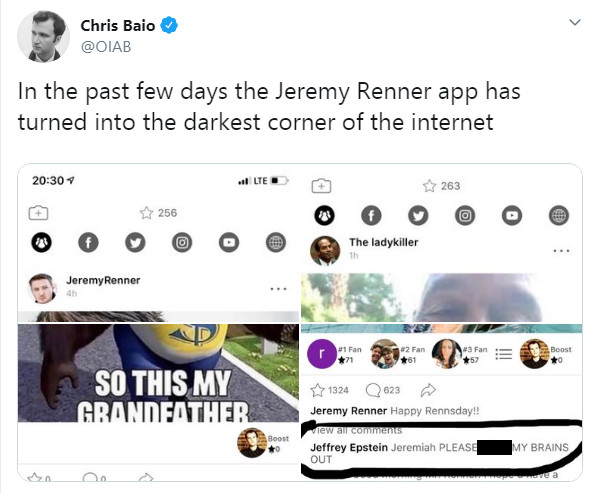 The EscapeX app was launched back in 2017 described as “the company whose powerful mobile app platform turns the social media reach of celebrities and other influencers into a potent fan engagement tool and revenue driver.”

The EscapeX app is not currently available in the App Store.

Jeremy Renner will next be appearing for Marvel in the What If? animated series and the Hawkeye series for Disney Plus.