It’s the Guardians of the Galaxy versus Inhumans crossover we’ve always dreamed of!? No, not really (nobody wants that), but we may have found out why James Gunn is a stick in the mud as Anson Mount hints the Marvel director may suffer from the Irish Curse!

What’s that you say? What is the Irish Curse?

Sunday on Twitter, James Gunn, for some reason, voiced his thoughts on actors that fib about their height in order to get auditions and parts, something that ticked off Anson Mount, who is known for playing Blackbolt in Inhumans and Captain Christopher Pike in Star Trek.

Gunn let loose a bunch of tweets about how he wished actors would tell the truth about their height which saw Anson Mount tweet that Gunn has no talent and a small penis (the Irish Curse which explains why some Irish come off as bitter).

Gunn didn’t really get into it with Mount, but the exchange is pretty funny, and what is interesting is that Anson Mount seemed to be stating the height thing is less about the actor’s actual height but what appears to be “male dominance/ ‘masculinity’ (particularly re: female counterparts).”

On a side note, it’s known certain actors wear elevator shoes to increase their height while filming (I’m pretty sure Robert Downey Jr. has at times), so I don’t see the height being a real issue, but apparently Gunn does. In addition, I would think if the height thing is really an issue, the director could change the angle of the camera (2000 X-Men movie comes to mind with Hugh Jackman who is listed at 6’3” playing Wolverine who is really short in the comics), but in the tweets below Gunn says that’s all a lie.

I wish actors (especially men) would tell the truth about their height when casting. Casting a whole show can be a balance of a lot of things, including heights, & easily 50% of the time male actors exaggerate how tall they are, sometimes by a lot, on their resumes.

I remember going out to eat to dinner for the first time with @djimonhounsou, @prattprattpratt & @DaveBautista. Djimon is a big guy, well over 6 feet & incredibly fit, & as he sat in his car he saw these two giants hulking out of the house, like a couple of kaijus stalking us.

6 feet. Which people are always surprised to see when they meet me in person because I surround myself with mammoths. https://t.co/hfEeaDQOkX

I don’t especially care if they lie to the public, which most A-list actors do, especially actors who aren’t tall. But lying during the casting process and on their resumes can affect what we’re filming, and that’s a different story. https://t.co/2UOVr2LhVz

A director talking about how casting is hurt because of men lying about their height is the ultimate in mansplaining? —

For my style of shooting- long takes of the camera moving around people, in close & out wide, as actors are in motion- these cheats would be ludicrous & wouldn’t work. In the rare cases it matters to the story, lying isn’t the answer.

They get away with it because then you’re cooked, and it’s so common that we don’t even notice.

On behalf of my kind I apologize. (My kind is men not people without teeth just to be clear). 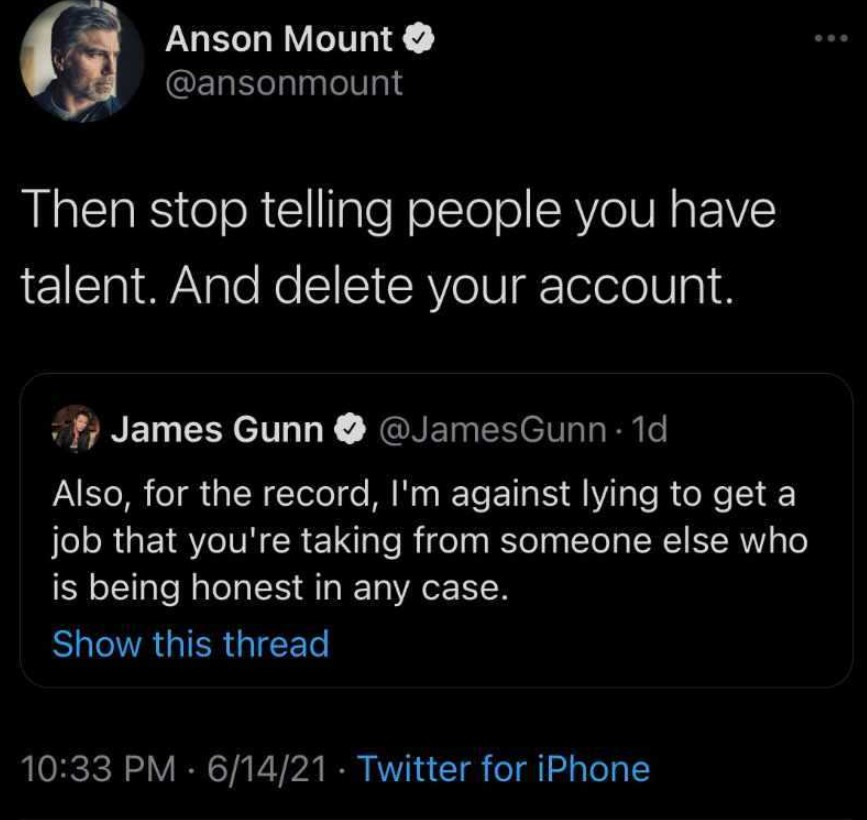 Well, James. It kinda shouldn’t fuc*in’ matter. Industry’s use of “height” is shorthand for male dominance/ “masculinity” (particularly re: female counterparts). Here’s a better idea: present US with your measurements when we walk through the door. We’ll likely be underwhelmed. https://t.co/QMNS3levwa 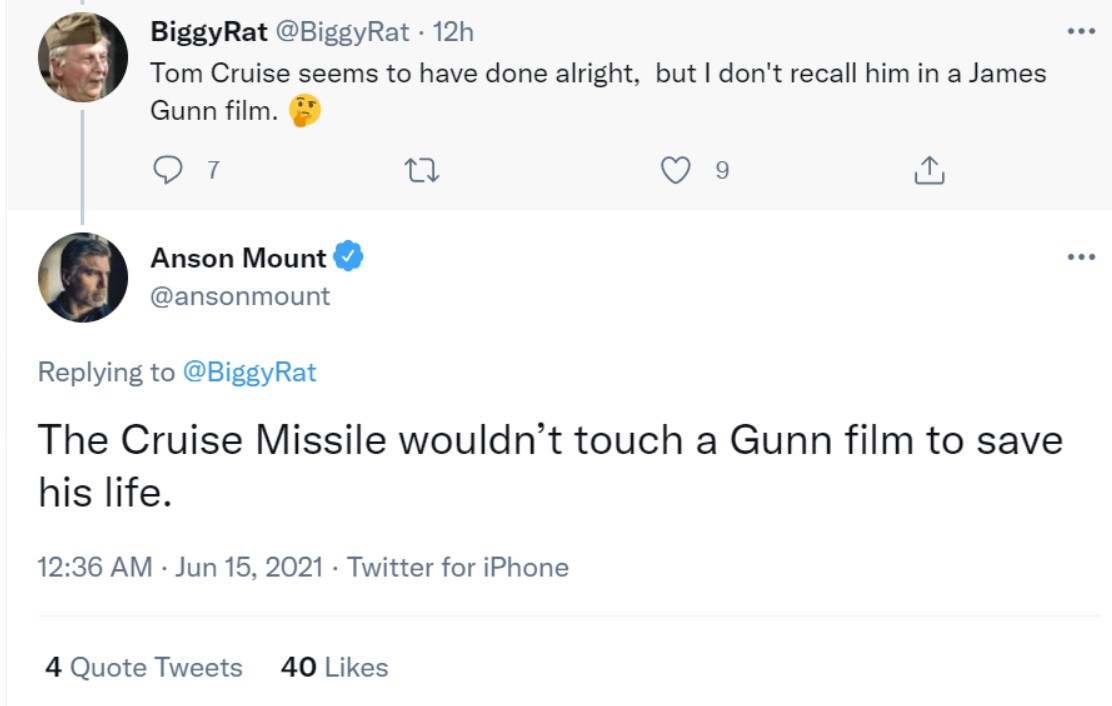 I don’t know why this hit such a nerve, @ansonmount, but, as a director, it does matter, because when you’re shooting two or more people the heights make a difference in how it’s shot. And sometimes you are looking for height disparity or parity. It’s about the storytelling. https://t.co/hsyhYUOPnp

1. I believe with is important for members of the establishment (you and I) to recognize our position and entitlement. The small benefits we experience can also exist as walls or, at times, dismissive disinterest in those who are still struggling for a foothold in our industry…

I can guarantee that should James, or anyone, snag Kevin Heart and Dwayne Johnson for the same film, they’d magically find a way to make it work.