While we wait for The Witcher, Henry Cavill stars in a new movie with Night Hunter that will be exclusively available on Direct TV starting September 6.

Henry Cavill stars as police detective Marshall along with Ben Kingsley as Cooper, a local vigilante, who hunt down a serial killer who preys on women.

Below you can watch the trailer and a clip from the flick where the Superman actor can be heard dropping an f-bomb, punching out a bad guy, and kicking the crud out of a radio playing annoying Christmas music.

The movie also stars Alexandra Daddario who is known for HBO’s True Detective and the recent Baywatch movie, as well as Transformers‘ actor Stanely Tucci, and Nathan Fillion; David Raymond wrote and direct.

Here is the synopsis:

Henry Cavill stars in this action-packed thrill ride that will shock you at every turn. When police detective Marshall (Cavill) and local vigilante Cooper (Ben Kingsley) arrest a serial killer targeting women, they discover his game has just begun. The hunt is on as the murderer masterminds a series of deadly attacks from behind bars. Now in a desperate race against time, Marshall and Cooper fight to stay one step ahead of their suspect’s deadly plan. Also starring Alexandra Daddario and Stanley Tucci, Night Hunteris a pulse-pounding thriller where the only way out is through the mind of a killer. Tick-tock. 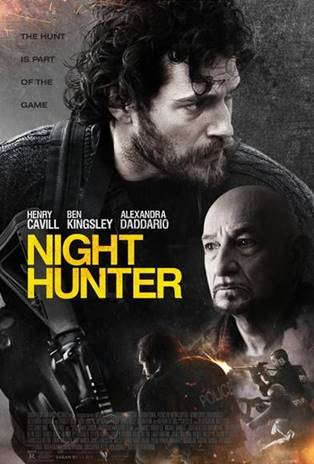