It's learned Marvel had to rewrite Doctor Strange 2 due to the titular character being a white male character which is directly related to the WandaVision Disney Plus series.

It has previously been reported that Benedict Cumberbatch and Doctor Strange were supposed to appear at the end of WandaVision to help out Elizabeth Olsen's Scarlet Witch.

However, the head of Marvel, Kevin Feige, confirmed they scrapped the idea because they couldn't let a white male help a female (it's true, read below).

The original article was published by Rolling Stone in early May where the article also confirms because they scrapped Benedict Cumberbatch and Doctor Strange from WandaVision, they also had to rewrite Doctor Strange 2.

Here is the excerpt from the article from Rolling Stone (bold my own):

The story of WandaVision‘s main character, Wanda Maximoff, a.k.a. the Scarlet Witch (played by Elizabeth Olsen), is set to continue in 2022’s Dr. Strange and the Multiverse of Madness, but the two projects were almost linked much more directly. As Marvel Studios president Kevin Feige reveals in Rolling Stone‘s upcoming, extensive oral history of WandaVision, Marvel struck a deal with Benedict Cumberbatch to appear in the final episode of the show as Dr. Strange. But late in the process, they wrote him out.

“Some people might say, ‘Oh, it would’ve been so cool to see Dr. Strange,’” says Feige. “But it would have taken away from Wanda, which is what we didn’t want to do. We didn’t want the end of the show to be commoditized to go to the next movie — here’s the white guy, ‘Let me show you how power works.’” That meant the Dr. Strange movie, too, had to be rewritten. In the end, Feige says, Marvel’s process is “a wonderful combination of very dedicated coordination, and chaos. Chaos magic.” At one point, back when Dr. Strange was supposed to be part of the story, the in-universe commercials were going to be messages from Strange to Wanda, and there was also talk of having Cumberbatch appear in one of the ads, head writer Jac Schaeffer says.

Wanda’s story will continue in 2022’s Dr. Strange in the Multiverse of Madness, but again, the two projects were almost linked much more directly.

Schaeffer: The plan when I came on board was that there would, at the end of the series, be a handoff, and that Dr. Strange’s participation would amount to essentially a short cameo. So early outlines had varying versions of the two of them [Wanda and Dr. Strange] kind of riding off into the sunset together. And it didn’t feel quite right. We wanted to fulfill Wanda’s agency and autonomy within this particular story. So it did feel a little tacked on. Another problem was, if Dr. Strange shows up at just the end, where was he this whole time? I did love writing variations of Dr. Strange, variations on those final beats. It was a pleasure to write for him. There were versions where she was flying past the city limits and then encountered Dr. Strange, that kind of thing.

Feige: Some people might say, “It would’ve been so cool to see Dr. Strange,” but it would have taken away from Wanda, which is what we didn’t want to do. We didn’t want the end of the show to be commoditized to go to the next movie, or, “Here’s the white guy, ‘let me show you how power works.'” That wasn’t what we wanted to say.

So that meant we had to reconceive how they meet in that movie. And now we have a better ending on WandaVision than we initially thought of, and a better storyline in Dr. Strange. And that’s usually how it works, which is to lay the chess pieces the way you want them to go in a general fashion, but always be willing and open to shifting them around to better serve each individual one. 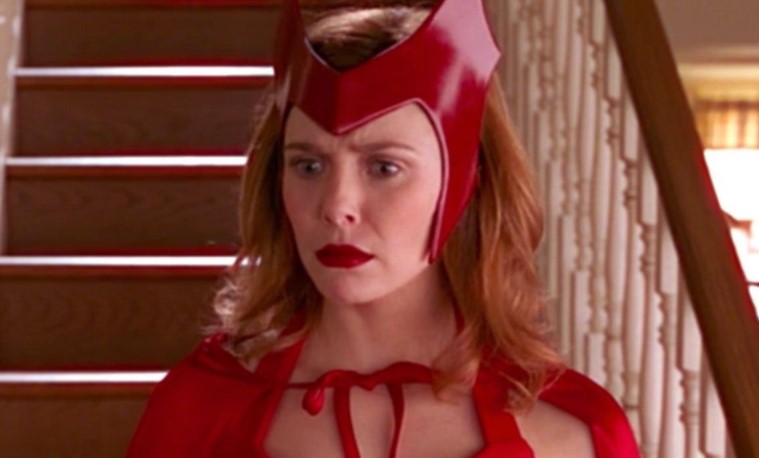 White males can no longer be the hero in the MCU

According to rumors from YouTuber Grace Randolph, the plan was for Wanda to blow the Multiverse wide open at the end of WandaVision.

Obviously the end of WandaVision would have connected to both Spider-Man: No Way Home and Doctor Strange 2, but again that didn't happen because Strange is a white male.

What is also interesting is that Loki was supposed to tie directly to Doctor Strange 2, but recently saw Feige refuse to confirm that the series connects when it was previously confirmed; so it appears that Loki, too, had to be rewritten.

This is just another example in a long line of examples throughout Hollywood of diversity destroying something because quality content and story are sacrificed for politically correct woke bullshit (Disney Star Wars, Captain Marvel, Ghostbusters, Terminator, Doctor Who, on and on).

Now instead of getting a connected Marvel Universe tieing WandaVision to Loki to Spider-Man to Doctor Strange - that's the MCU - everything had to be torn apart and rewritten.

What is also hilarious is that Elizabeth Olsen confirmed Scarlet Witch has the power to travel the Multiverse (part of the title of Doctor Strange 2), but none of that was shown in WandaVision -- again which would have connected everything.

Recall back in 2019 I wrote how diversity is destroying the MCU.