IDW Publishing continues with it Marvel Comics kids line as it announces the addition of a Captain Marvel comic aimed at middle grade readers.

Back in March, I put it forth that the potential is out there for Disney to shut down Marvel Comics and license out the entire line to third parties.

Disney does the same and farms out their video game line, as they feel it’s too much work, not worth the time, and that they can’t make money. So for whatever reason, even though they have a Marvel Comics publishing line, we see Disney licenses out a kids line to IDW Publishing.

Regarding Disney farming out their intellectual properties, the same may eventually apply to Marvel Comics, as it is known Disney’s Consumer Products Division – which includes Marvel Comics and Star Wars – has been tanking for the past few years.

It was actually put forth at the recent SXSW that Marvel Comics was trying to bring attention that the comics are the inspiration for forms of media that do make money in order to make themselves look good, which saw Marvel CCO Joe Quesada blast the “conspiracy theory” on Twitter stating that notion wasn’t true.

Below you can check out the IDW Captain Marvel announcement. It will be interesting to see what Disney does in the next few years with Marvel Comics, as investors have to be taking notice the Consumer Products Division is the only division at Disney that makes less money each year (and following my article on the topic is why Disney changed how they report their CP division, as now they combine it with their Parks division which does make money, so now it appears as if they both make money). Also worth a mention is that the regular Captain Marvel comic put out by Marvel that was recently relaunched a few months ago in conjunction with the release of the movie is already near cancellation levels.

An All-Out Flerken Invasion Challenges Carol Danvers to Go Higher, Further, and Faster Than Ever!

Carol Danvers’ quiet night with BFF Jessica Drew (Spider-Woman) takes a catastrophic turn when Manhattan’s bodegas are suddenly overrun by a host of angry felines! And not just any felines—Flerkens, the most terrifying, pocket-dimension-holding, tentacle-devouring kitty-look-alikes in the entire universe! Can Captain Marvel overcome the formidable foes before it’s too late?

“I feel so privileged to help launch Captain Marvel’s solo title for Marvel Action,” says Sam Maggs. “Carol has always been my favorite super hero; I love how she’s truly come into her own, culturally, and is finally being widely-recognized as the star that she is. Being able to write for Carol is the most exciting and terrifying thing that’s ever happened to me. I can’t wait to share this arc with everyone!”

Sweeney Boo says, “This comic is for everyone! If you have seen Captain Marvel’s movie and want more of her, and if you are a cat lover, this is definitely for you. This title has everything – it’s funny and sweet, it has powerful moments, and it’s absolute cat madness!”

“Working with Sam and Sweeney on a story featuring one of the most iconic super heroes of our time has been a dream,” says Megan Brown, assistant editor. “I adore Carol — she’s strong, capable, funny, and someone that anyone can look up to. In Marvel Action, we’re also highlighting the strength of her friendship with Jessica Drew, and it’s been such a positive, uplifting experience bringing this rock-solid bond between two absolutely amazing ladies to life.”

Marvel Action: Captain Marvel will be available with a regular cover by Sweeney Boo, plus a special retailer incentive variant by Brianna Garcia (Disney Princess). 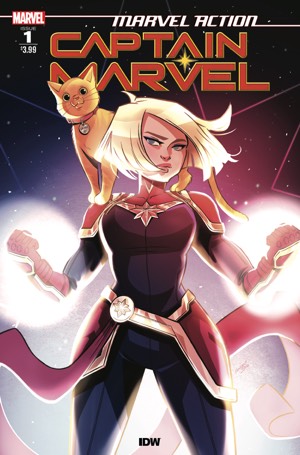