DC Comics confirms cancellations of a number of titles including Suicide Squad, Teen Titans, and more, which follows the massive layoffs and Jim Lee confirming the reduction of the number of comic books published by the company.

The cancellations will start to take effect in October and November, as Batgirl, Batman and The Outsiders, and Justice League Odyssey ends in October.

Solicit info can be found below.

While not confirmed, Aquaman is also thought to be ending as November's solicitation states: "Guest-starring the Justice League in a finale that will amaze you!" In addition, the issue is also the final issue by writer Kelly Sue DeConnick who came over to DC along with Brian Michael Bendis and replaced Dan Abnett on Aquaman (sound familiar Marvel Cosmic, fans?). DC also hasn't announced a new creative team.

It's my guess that some of the titles will be relaunched in conjunction with movie releases, such as a new Suicide Squad comic book to go with James Gunn's movie that gets released next August, the same for Aquaman as the sequel is in the works, etc.

Regarding what Jim Lee had to say, Lee confirmed not only is DC Comics reducing the number of comic books published but that they are focusing on their "franchise brand content," which means whatever WarnerMedia decides to go with on the big screen, streaming, etc. (more Batman comics with Batman movies, Aquaman movies, The Suicide Squad, etc). 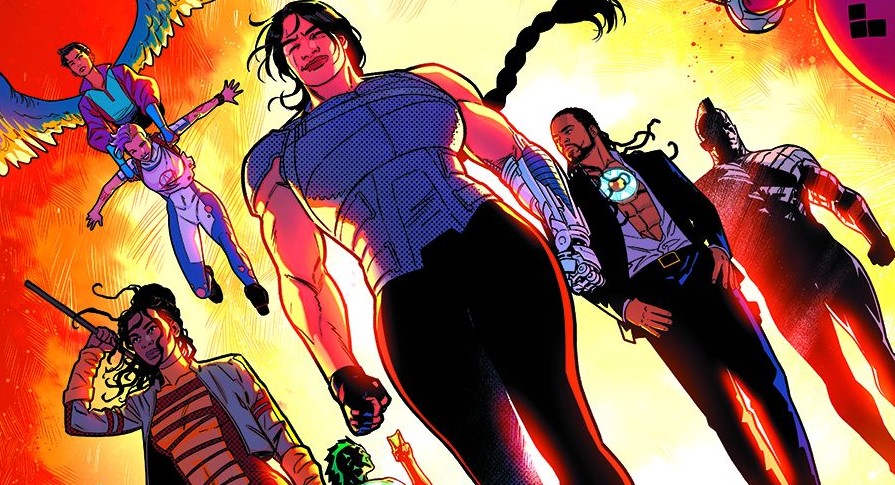 In this final issue, Scorn makes his final move to destroy justice in Gotham City! Injured and alone against an army of chaos, Batman has one chance to save the city: his ability to think like the victim. But the victim is always dead. The Batman can only win by using the approach of his own death.

FINAL ISSUE
He’s lived and died and lived again. But now, with just one life left to live and the reincarnation cycle at its end, will Hawkman sacrifice everything to protect the woman he loves from the cursed blade of Hath-Set? Learn the fate of Hawkman and Hawkwoman in a tale that will take you to the edge of time and space!

FINAL ISSUE
John Constantine faces his final reckoning with the older version of himself who’s been seeding magical chaos all around England, while the lives of all his friends hang in the balance…and that is not a good situation for John Constantine’s friends. Can the evil in John’s heart ever be contained? Or will it reach out and destroy the one life he would give anything not to corrupt?

It’s the final issue in this epic adventure with Doc Magnus and the Metal Men! Is there more for the Metal Men out there in the world that can give them purpose? And what’s the fate of Nth Metal Man, belonging neither on his world nor ours? Everything will be answered, including some unanswered questions Tina has for Magnus!

FINAL ISSUE
The explosive final issue is here! Task Force X has been through hell and back. Now they’re the last thing standing between a human bomb and an island full of innocents. Which means that even if they win the day, there’s nowhere to run when the Justice League arrives to clean house!

FINAL ISSUE
Robin betrayed them. Superboy abandoned them. Now the only Teen Titans left are Crush, Kid Flash, Red Arrow, and Roundhouse. As the teen heroes wrap up what may be their final mission, they’re going to get some unexpected encouragement from a group that knows a little about how hard it is to be heroes. Special guest stars the original Titans prove there may still be some good this team can do in the future.

FINAL ISSUE
For the first time in months, the entire Young Justice team comes together to face a threat bigger than anything they’ve faced before. Just as the team has come to grips with their fractured legacy, someone from Young Justice’s past has come back to murder them! Guest-starring the Wonder Twins, Dial H for Hero, and Naomi—plus some other Wonder Comics surprises too hot to mention here! Don’t miss this final issue from the Eisner Award-nominated co-writers of Naomi!

Villains, heroes, machinations, and long-held grudges from Kelly Sue DeConnick’s definitive Aquaman run all converge in this issue! Arthur is defeated, Mera’s held captive, and Orm’s grand plan is near completion! Together, Mera and Arthur are one of DC’s most powerful couples, and when they send out the call, you better believe that everyone answers. Guest-starring the Justice League in a finale that will amaze you!