It’s a rematch between the Hulk and Thanos in The Avengers: Endgame trailer for the Marvel Future Fight video game update.

Thanos can be seen with the Infinity Gauntlet sporting his new weapon as he battles Black Widow and Captain America when the Hulk arrives with his new suit and takes on the Great Titan. Ronin (Hawkeye) then arrives for the assist. The poster art also features Captain Marvel, Thor, Nebula, and Rocket Raccoon. Check out the official details below.

Prepare for the Upcoming Blockbuster Film with New Uniforms, Legendary Battle, and

Several new updates are now live in MARVEL Future Fight as players can jump into the action depicted in Marvel Studios’ Avengers: Endgame through the game’s new Legendary Battle. Three new stages will consist of backgrounds and characters from the new film for fans to enjoy. The huge update also allows the infamous Super Villain Thanos to advance to Tier-3, while gaining a new Ultimate Skill that fans have looked forward to.

All-new Marvel Studios’ Avengers: Endgame themed uniforms for MARVEL Future Fight’s fan-favorite characters, including Iron Man, Captain America, Black Widow, Hulk, War Machine, Nebula, Rocket Raccoon, Ant-Man, Ronin andThanos, are available to earn. New ‘Team Suit’ uniforms for these characters, with the exception of Ronin and Thanos, are also available. To celebrate the new uniforms, some of the old uniforms’ growth material is now at half its original price and is available for purchase with Gold. Hawkeye and Nebula can become even stronger as the ‘Unleash Potential’ function is now unlocked for both characters.

Other additions to MARVEL Future Fight include:

“This is it, this is the big one. In culmination of celebrating and being inspired by Marvel Studios films over the past four years, MARVEL Future Fight has now released their most impressive update ever,” said Marvel Games VP & Creative Director Bill Rosemann. “The teams at Netmarble and Marvel Games have been collaborating for many months to deliver our best event yet, and we are so happy and grateful to share it with True Believers around the world.” 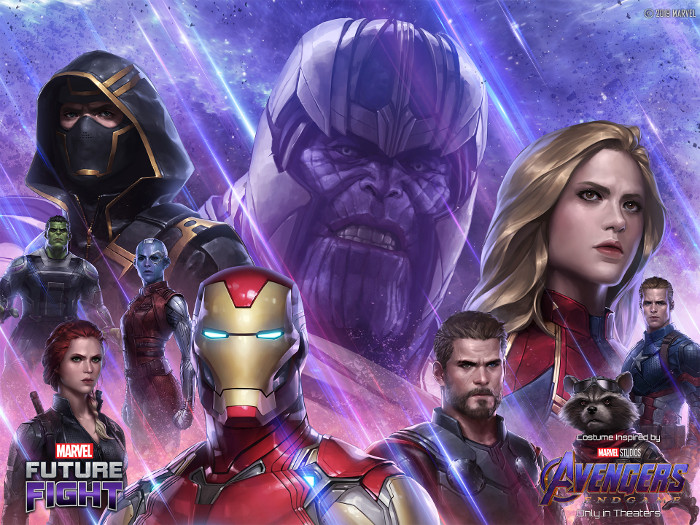