Today happened to be the big day when “millions” of people were supposed to Storm Area 51, with only a couple of dozen or so people showing up, but at least the Naruto run was caught on camera with people also spotted wearing tinfoil hats.

“Storm Area 51” went viral on Facebook over the Summer, as a group was formed which received millions of followers, advocating to storm the controversial secretive military base in the Nevada desert.

It was advised by the group to do a “Naruto run,” which references the popular Naruto anime series that sees the titular character run with his head forward and arms behind his back to run faster (which of course doesn’t really work).

A video has since gone viral on Twitter showing a reporter talking about the storm Area 51 campaign where a man can be seen doing the Naruto run in the background.

Images have also surfaced of people, rather fittingly, wearing tinfoil hats in order to protect their brains, with a sign also reading “Storm That Alien Booty” while also shouting “clap them cheeks.

IDK IF THE RAID WILL BE SUCCESSFUL OR NOT BUT THEY HAVE SUCCESSFULLY MANAGED TO REACH PEAK COMEDY HOURS THERE —-#Area51storm pic.twitter.com/nLComEoq7I 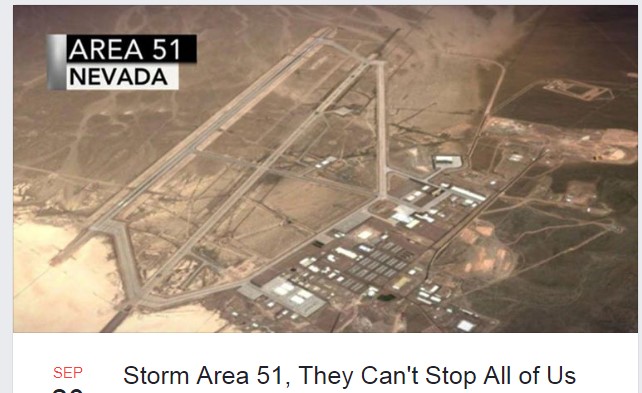 Regarding the controversy surrounding Area 51, it has been theorized to house everything from aliens to alien tech, to secret advanced Illuminati technology involving time travel, to advanced secret military tech.

My own thoughts are that it’s more about the latter, advanced technology that is being kept hidden and secret and that it has nothing to do with goofy grey aliens from outer space or other dimensions (ufoology).