Universal Pictures has released the new trailer for Nobody, which stars Bob Odenkirk of Breaking Bad and Better Caul Saul fame.

However, this isn’t the comedic lawyer we are all used to, it’s Odenkirk as a husband and father who has more in common with Keanu Reeves’ John Wick.

“Sometimes the man you don’t notice is the most dangerous of all,” the trailer description teases. Watch below.

The flick is actually written by Derek Kolstad who wrote the John Wick movies and you can see the similarities in the trailer.

Odenkirk revealed he took the part seriously and trained for two years spending hundreds of hours in the gym practicing the choreography over and over until he got the fight scenes right.

“I trained for two years before we started shooting. I knew I had a long way to go. I was a comedy writer for 25 years so I didn’t even exercise for most of my life,” Odenkirk told IGN. “We weren’t trying to develop a superhero body. I look like a dad, I look like a regular guy. Maybe I eat fewer hamburgers than you, but I still eat hamburgers. I said, when this guy gets hurt I want that pain to linger. So many times people get punched and they shake it off and they’re fine. I wanted him to feel all the impact of the fighting and violence.”

Regarding the comparisons to John Wick, Odenkirk says his character is a different take.

“Look, you’re going to see the DNA of the John Wick writer in Nobody, but it’s fundamentally different than John Wick,” Odenkirk explained. “In my case, the character and his own inability to contain his frustration and rage is what provokes the danger around him. It’s a more complex story set up.” 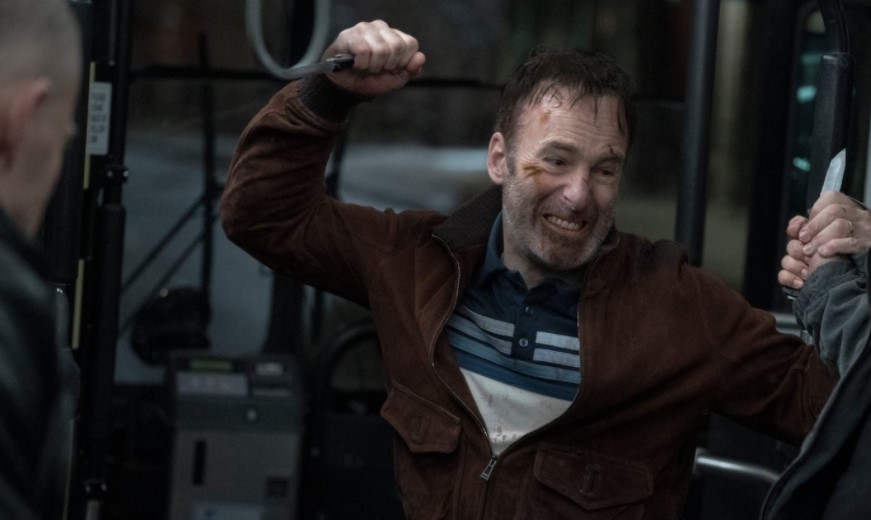 Nobody hits theaters on February 26

Emmy winner Bob Odenkirk (Better Call Saul, The Post, Nebraska) stars as Hutch Mansell, an underestimated and overlooked dad and husband, taking life’s indignities on the chin and never pushing back. A nobody.

When two thieves break into his suburban home one night, Hutch declines to defend himself or his family, hoping to prevent serious violence. His teenage son, Blake (Gage Munroe, The Shack), is disappointed in him and his wife, Becca (Connie Nielsen, Wonder Woman), seems to pull only further away.

The aftermath of the incident strikes a match to Hutch’s long-simmering rage, triggering dormant instincts and propelling him on a brutal path that will surface dark secrets and lethal skills. In a barrage of fists, gunfire and squealing tires, Hutch must save his family from a dangerous adversary (famed Russian actor Aleksey Serebryakov, Amazon’s McMafia)—and ensure that he will never be underestimated as a nobody again.

Nobody is directed by acclaimed filmmaker Ilya Naishuller (Hardcore Henry), from a script by Derek Kolstad, the narrative architect of the John Wick franchise, and co-stars legendary Emmy winner Christopher Lloyd as Hutch’s father and multi-hyphenate musician-actor RZA as Hutch’s brother, whose own hidden talents aid Hutch in his quest for vengeance.