The episode nearly plays out exactly like the premiere, but the good news is we get more.

Moon Knight summons the suit in Episode 2, and it's another good one.

While the episode does follow a similar path as the first episode, there is a decent amount of payoff as we are treated to a new character, the story progresses, and we go to see both Steven and Marc as they suit up and fight in their respective suits.

I nearly titled this review "Kevin Feige needs to pull the trigger" as I was afraid Episode 2 was going to play out exactly as Episode 1 - which it nearly did (how about a different monster to fight than the Jackal again?) - but again, the good news is that Episode 2 gives us more. The first two episodes are slightly a bit tedious, but it is mysterious, so we just have to stick with it and hope there is a big payout at the end.

As I watched tonight's episode, I was afraid that we wouldn't see much of Moon Knight, as I've seen more than one remark or two online about how the show is titled "Moon Knight" but Moon Knight really didn't appear in the first episode. My thinking was that Moon Knight isn't given much of a budget, so they have to work around that, and they're doing it by not showing Moon Knight, but again, I'm happy to say that didn't happen, as so far what I am seeing from Moon Knight looks pretty good. A couple of Redditors also remarked they didn't like the CGI in the first episode, but I didn't have a problem with it, and I thought the special effects in tonight's episode were done pretty well, with the invisible fight scenes against the Jackal coming off particularly good. 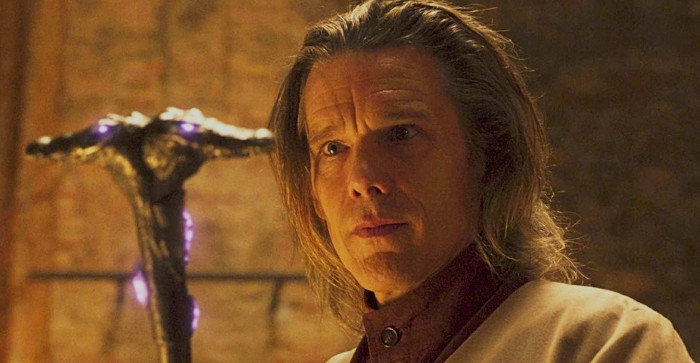 Oscar Isaac is great in this and his acting makes me believe there are really two different people playing the roles, and I am looking forward to seeing more from Marc Spector in Egypt. Speaking of Egypt, I know director Mohamed Diab isn't happy at all with how Hollywood, and particularly Wonder Woman 1984, depicts his hometown of Cairo, so we should be getting some cool scenes in subsequent episodes. I can relate to Diab's feelings about how his hometown is depicted, as I'm from Buffalo, and the national media always mentions how we get snow, have bad weather, blizzards, etc., whenever we are the center of news (go Bills!) while that is not exactly the case.

Ethan Hawke just might be my favorite and brilliantly continues to play Arthur Harrow, and the show continues to play up the theme of just who is the good guy and who is the bad guy. Harrow's thinking reminds me of the Tom Cruise movie, Minority Report, where people are punished, or in the case of this show killed, for crimes they have yet to commit, aka by the thought police. On the flip side, Moon Knight is Marvel's "Fist of Vengeance" who punishes people for the crimes they have already committed - not before - but Harrow brings up the point that punishing them after the fact is too late and doesn't help anyone. Of course, this leads to all kinds of questions, particularly about who is doing the judging (who watches the watchmen?) prior to the act committed and things of that nature (punish someone for merely the thought and not the action?).

So we are two episodes in, and so far, Moon Knight is a good show. Let's hope they don't screw it up.