The actress known for the Transformers movies confirms drinking the blood of her fiancée Machine Gun Kelly.

Back in January, the actress known for Transformers, posted on Instagram that she got engaged to Machine Gun Kelly where she first mentioned the blood-drinking, as she said, “Just as in every lifetime before this one and as in every lifetime that will follow it, I said yes… And then we drank each other’s blood.”

Now in a new interview with Glamour Magazine, Megan Fox is asked about the blood drinking and admits it's for ritual purposes and also that she is into tarot cards and astrology.

Megan Fox continued, "I’m much more controlled. I read tarot cards and I’m into astrology and I’m doing all these metaphysical practices and meditations. And I do rituals on new moons and full moons, and all these things. And so, when I do it, it’s a passage or it is used for a reason. And it is controlled where it’s like, ‘Let’s shed a few drops of blood and each drink it.’ He’s much more haphazard and hectic and chaotic, where he’s willing to just cut his chest open with broken glass and be like, ‘Take my soul.’”

When pressed if the blood-drinking really happens, Megan Fox confirmed it does.

“It doesn’t not happen,” she responded, again laughing. “Let me tell you. Maybe not exactly like that, but a version of that has happened many times.”

Interestingly enough, Megan Fox recently played a vampire in the Night Teeth movie on Netflix and she is featured in Machine Gun Kelly's song "Bloody Valentine," so we see the casting is on point, and she also has The Expendables 4 coming out soon, and according to her IMDb account, Megan Fox has Good Mourning, Naya Legend of the Golden Dolphin, and Johnny & Clyde in the works. 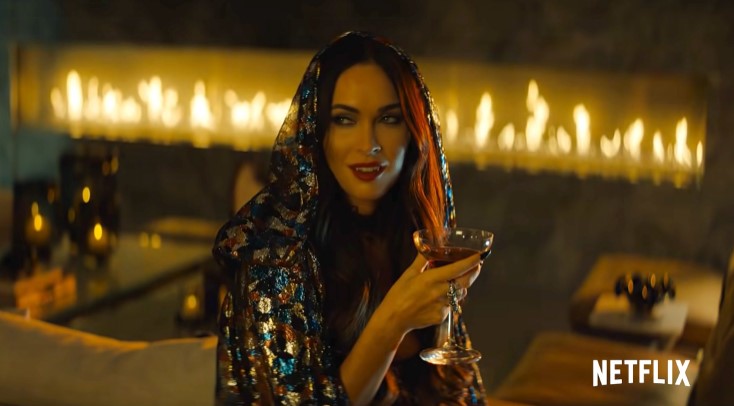