Warner Bros. and New Line Cinema have announced they are developing a The Lord of the Rings: The War of the Rohirrim anime prequel that is set 250 years prior (during the Third Age) to the Peter Jackson Trilogy focusing on Helm’s Deep, the fortress featured in The Two Towers.

War of the Rohirrim will center on the King of Rohan, Helm Hammerhand, and dive into his bloodsoaked story and is confirmed to be set in the same universe as the Jackson films. Deadline offers Peter Jackson is not presently involved but notes that could change.

Details include the anime is being fast-tracked for the big screen, with Sola Entertainment (Blade Runner, Ultraman, Starship Troopers) providing the animation work, and the voice casting is currently underway.

Kenji Kamiyama (Blade Runner: Black Lotus, Ghost in the Shell: Stand Alone Complex) is directing, Jeffrey Addiss and Will Matthews (The Dark Crystal: Age of Resistance) are writing, and Philippa Boyens, who was a part of the original screenwriting team behind the Jackson Trilogy, will serve as a consultant. 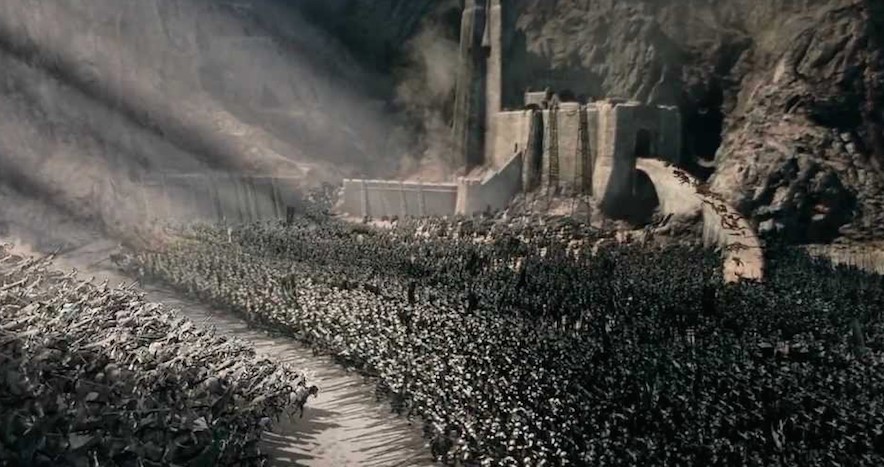 ‘Lords of the Rings: The Two Towers’ Helm’s Deep

“Yet another epic portrayal”

“This will be yet another epic portrayal of J.R.R. Tolkien’s world that has never been told before. We’re honored to partner with much of the incredible talent behind both film trilogies, along with new creative luminaries to tell this story,” Warner Bros. Animation President Sam Register said in a statement. As EW notes, Register then quoted King Theoden’s line at the beginning of the siege of Helm’s Deep from The Two Towers: “And so it begins.”

In addition to The War of the Rohirrim, a Lord of the Rings series is also in development at Amazon set in the Second Age which has already gotten an earlier renewal for a Season 2.

This year also marks the 20th anniversary of the release of The Fellowship of the Ring.