It’s guessed that Booster Gold is coming to Legends of Tomorrow as Donald Faison has been announced to be playing a mystery character on the show which sounds a lot like the glory-seeking showboat from the future.

Donald Faison is set to appear in the Season 7 finale as an unnamed mystery character seeking “fame, fortune, and glory,” where the producers are hoping Faison will return if there is an eighth season.

Here is the official description of the character for Legends of Tomorrow, which sounds a lot like blond white dude Booster Gold from the DC Comics:

“The Legends first encounter this character at a different phase of his career whose golden years are in the rearview mirror. He is good guy deep down; his ego is looking for a boost that only fame, fortune, and glory can provide. While he claims to have been recruited to work for a mysterious time organization, he wasn’t offered much of a choice in the matter. As an unauthorized time traveler with high-profile aspirations, he developed a mischievous streak and cuts a few corners along the way to achieving his dreams. He knows all about the Legends of Tomorrow and finds them inspiring because they are the kind of heroes who started at the ground floor, as opposed to inheriting their powers from an alien planet, a spider bite, or wealthy parents. But the big question is whether his respect for the team is going to be able to help the Legends out of hot water or get them into hotter water!”

The showrunner on Legends of Tomorrow also filled in EW.com they are thrilled to be working with Faison, who was recently cast as Professor Utonium in the canceled Power Puff Girls pilot.

“We are beyond thrilled to have Donald Faison join the Waverider,” said Phil Klemmer and Keto Shimizu. “We are all huge fans of his impressive body of work, and seeing him with the rest of the Legends in our finale was an absolute, side-splitting joy. We can’t wait for our fans to see who he’s playing, and we look forward to telling many more stories with him and our lovable misfits should we be blessed with an eighth season.”

Donald Faison is known for Scrubs, Skyline, and Clueless and commented on the casting on Instagram: “I’m really excited about this and I want you to get excited too!!! If you haven’t already… get onboard and catchup with.” 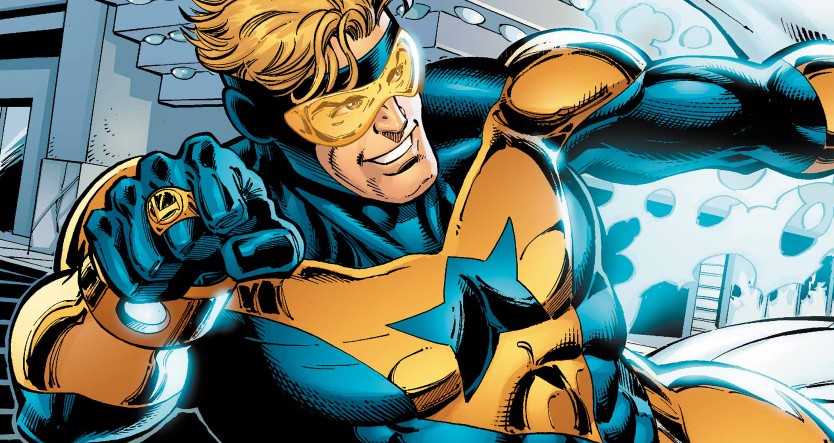 A scoundrel from the future intent on making a name for himself in the past, Booster Gold has nevertheless exhibited his share of heroism.

When opportunity arises, you have to seize it! That’s an idea that has driven Mike Carter, a college football star of the 25th Century who earned the nickname “Booster” on the field. Even though people assured him a professional career of fame and fortune was in his future, he decided he couldn’t wait and wagered on his own games. The scandal halted his dreams of professional stardom and ruined his reputation. Taking a job as a security guard in the Metropolis Space Museum, Mike saw another opportunity after studying the early age of superheroes. With future and alien technology stolen from the museum, and a time machine that was on display, he realized he could not only become a superhero himself in a past era where his criminal history was unknown, but he could also make his good deeds profitable.

With his robot pal Skeets at his side, Mike time-traveled to the modern age and debuted as Booster Gold. For years now, he’s fought evil alongside different versions of the Justice League and his good pal Ted Kord, the second Blue Beetle. Recently, Booster Gold has broadened his scope and acts as a protector of history itself. Though always eager to take credit for good deeds on social media or sign with a well-paying sponsor, Booster is a good guy at heart and will drop everything if he genuinely sees someone in need.