Without getting into spoiler territory if you haven't seen Fallout, it's reported that McQuarrie is said to be considering bringing back the characters played by not only Henry Cavill, but Alec Baldin as well, in flashback scenes. It's noted the scripts still have yet to be rewritten, but there is a chance Henry Cavill could be back as August Walker, with the mustache and all.

Mission: Impossible - Fallout was a big success bringing in almost $800 million, so Paramount has fast-tracked two additional films that will be released in 2021 and 2022. The movies actually would have been released earlier if not for the release of Paramount and Tom Cruise's Top Gun 2 in 2020.

Regarding Henry Cavill, there has been question why he hasn't signed on for any new movies, and now we may know why, it is because he may be back for Mission: Impossible. He is also doing the new Netflix The Witcher series, where he is currently filming in Hungary. It's also thought a reason he hasn't signed on for any new movies is because of his contract negotiations with Warner Bros. about returning for another Superman movie. During the filming of Fallout, Henry Cavill stated numerous times that he wants to return to the Superman role for a Man of Steel 2. Reportedly, Henry Cavill's manager is trying to get the actor a raise, but WB is being stingy about things.

Henry Cavill most recently posted about Mission: Impossible - Fallout and the mustache following the flick having received the Best Action award at the recent 2019 Critics Awards.

"The moustache that launched a thousand ships or at very least shot down Tom Cruise's helicopter," Cavill posted on Instagram.  "If it weren't for the genius of McQuarrie, the Tom Cruise-iness of Tom Cruise, and the exceptional hard work of all our cast and crew, Kingstache would've never have had his moment in the sun. I feel extraordinarily lucky to have been in such fine company." 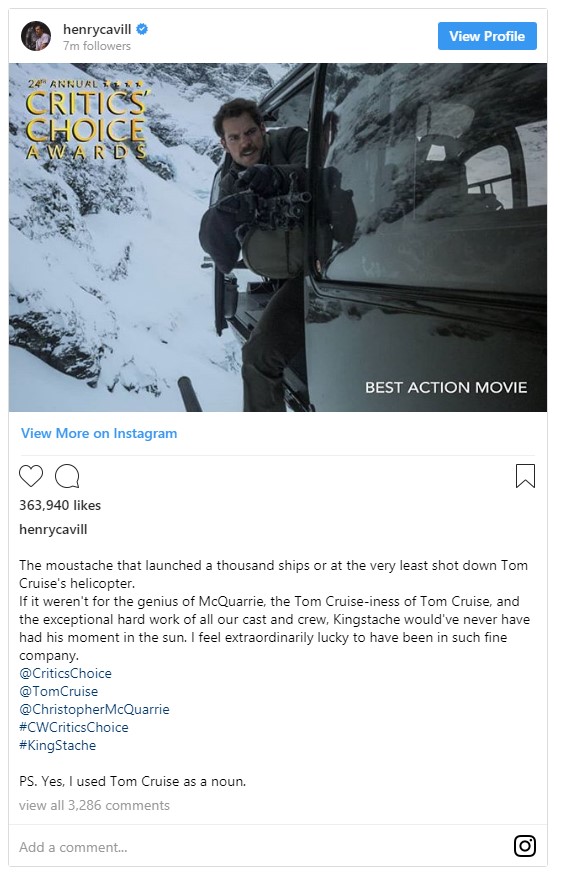