The new Disney Plus Baymax! animated series features a questionable scene involving a young girl having her period and the need for a woman’s product which involves a transgender male character.

Christopher F. Rufo revealed the video of the scene from Episode 3 on Twitter which features Baymax going to the store and asking for recommendations where people chime in on which product is best and a character wearing a transgender shirt offers his two cents (I guess he isn’t fully transformed, yet).

Previous to the scene sees the young girl go into an all-gender bathroom horrified to realize she is having her first period where there are no products and asks for help from Baymax who is a “personal healthcare companion.”

“I wasn’t prepared for this!” Sofia says. “And the dispenser’s empty! And I don’t even have a thing! A tampad. A pad-pon. A maxi-pad-pon with wings?”

Baymax heads to the store and a woman chimes in recommending the brand she uses, with a father recommending what his daughter uses, the transgender recommends the winged version and another woman recommends a brand that is safe for the environment.

“It is common for people to feel embarrassed, fearful or uncomfortable with the subject of menstruation. But it is just biology. It is nothing to be ashamed of,” says Baymax who also tells the 12-year-old girl exercise can help with menstruation.

Episode 4 also sees Baymax helping a gay man to get a date as Baymax detects Mbita’s heartbeat and can apparently detect if someone is into someone.

“Your pulse and heartbeat have quickened. Your pituitary gland is secreting hormones,” says Baymax where the episode ends with the two gay guys walking off.

EXCLUSIVE: I’ve obtained leaked video from Disney’s upcoming show “Baymax,” which promotes the transgender flag and the idea that men can have periods to children as young as two years old.

It’s all part of Disney’s plan to re-engineer the discourse around kids and sexuality. pic.twitter.com/y1ATnKCEce 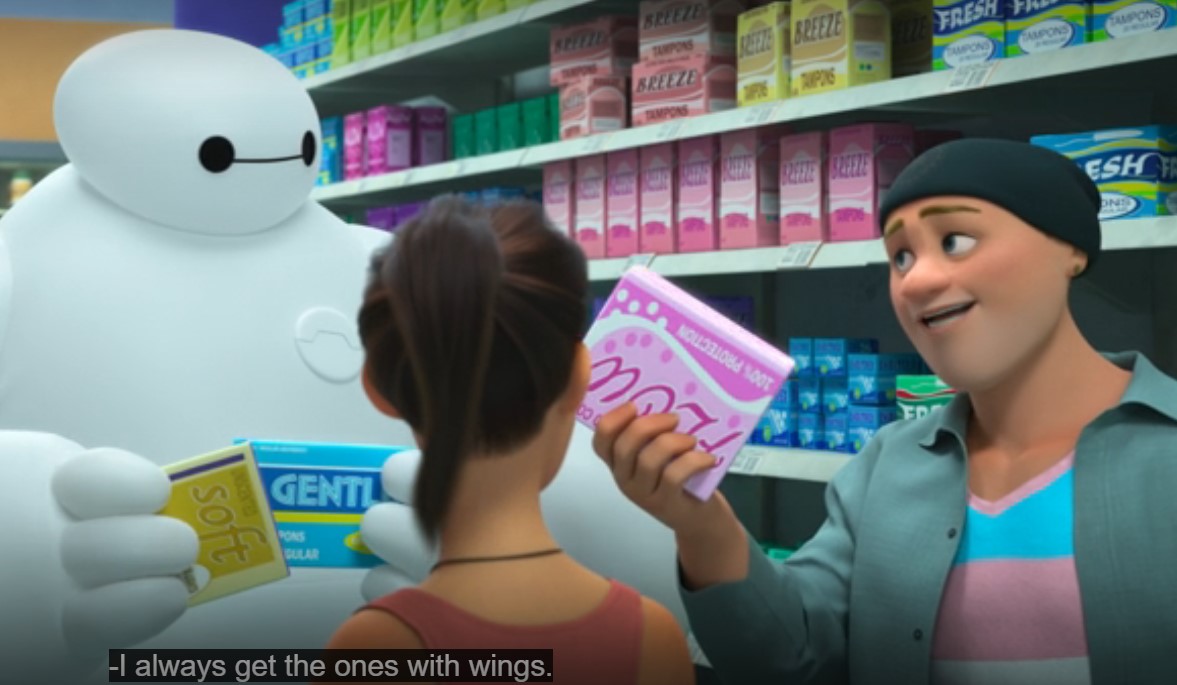 Christopher F. Rufo previously revealed video of Disney executives admitting their LGBTQ agenda as a Disney producer admitted the company has a “not-at-all-secret gay agenda” and that Disney is regularly “adding queerness” to children’s programming.

A second video shows a Disney corporate president stating that “as the mother [of] one transgender child and one pansexual child,” she supports having “many, many, many LGBTQIA characters in our stories” and wants a minimum of 50 percent of characters to be LGBTQIA and racial minorities.

A third video shows a Disney production coordinator stating his team is committed to “exploring queer stories” and has created a “tracker” to make sure they are creating enough “gender-nonconforming characters,” “canonical trans characters,” and “canonical bisexual characters.”

A fourth video shows a Disney diversity and inclusion manager stating the company has eliminated all mentions of “ladies,” “gentlemen,” “boys,” and “girls” in its theme parks in order to create “that magical moment” for children who do not identify with traditional gender roles.

“Why is the hill to die on having transgenderism injected into kindergarten classrooms or woke gender ideology injected into second-grade classrooms? Why is that the hill to die on? Meanwhile, if we had done a bill that prohibited talking about the abuse of leaders in China, Disney would have supported that legislation because they don’t want to say a word about that. So it’s just an odd manifestation of their corporate values that they actually do Disney cruises to the nation of Dominica which criminalizes homosexuality, so they’re fine doing that and lining their pockets. They are fine lining their pockets from the CCP and all the atrocities that go on there but it’s those kindergartners in Florida that they really want to have transgenderism as part of their core curriculum in school.”