Black Widow’s alternate death scene in The Avengers: Endgame has surfaced online which offers a different take on the Soul Stone scene.

In the theatrical version, Black Widow and Hawkeye go to Vormir and encounter the Red Skull in wraith form who tells them a sacrifice has to be made in order to get the Soul Stone.

Black Widow ends up sacrificing herself and saves Hawkeye which unlocks the Soul Stone for The Avengers to use against Thanos.

In the Black Widow alternate death scene, seen below, Thanos and his army attack Vormir to stop the Avengers from getting the Soul Stone.

The footage shows Black Widow and Hawkeye under attack with lasers hitting Black Widow who, upon seeing Thanos, decides to jump off the cliff.

I have to say that I am glad they didn’t go with this version as it’s not done all that well.

For one (and this even pertains to the theatrical version), they send two Avengers with no super powers to arguably acquire the most important and powerful Stone.

The footage shows Black Widow with two tiny guns and Hawkeye with a sword (lol) against lasers.

So as Thanos shows up does he kill Hawkeye and get the Soul Stone?

Correct me if I am wrong, but I think the original part of this plan was to have Captain Marvel (eye roll) fly in and save the day.

Again, it’s a good thing they cut this scene and went with the theatrical version which was much more emotional.

It’s also known there was another version where Hawkeye dies instead of Black Widow but the visual effects producer was against the idea and said, “Don’t you take this away from her.”

The Russos also touched upon why Black Widow is killed here. 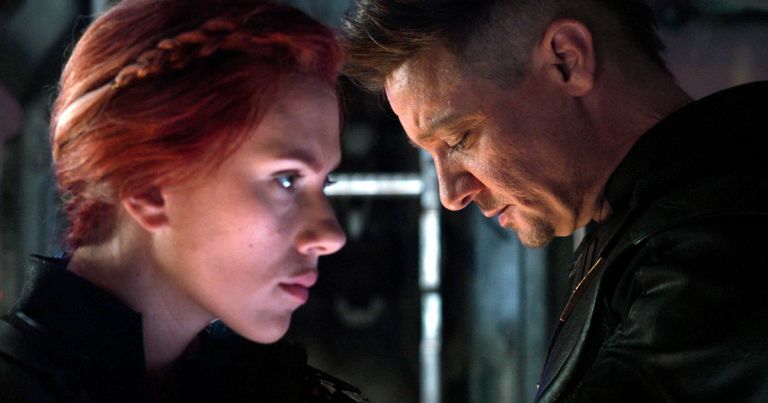 Send two people with no superpowers to get the most important stone. Smart. pic.twitter.com/5GUnuITn7W

Hand guns and a sword vs laser beams. Smart. pic.twitter.com/9n1FHi1HvC

It went from a sacrifice to Suicide lol