To anyone thinking #IndianaJones5 might be good, just let me point out...

1. Steven Spielberg is not directing.
2. Kathleen Kennedy is producing.
3. Harrison Ford is 78 years old.
4. It's written by Jonathan Kasdan, who wrote SOLO.

The tweet has been retweeted almost 100 times and liked by over 500 fans, which is something that James Mangold caught wind of and replied back, obviously irked by the comment:

1) Keep making the world a better place crapping on things in the 1st week of production from your basement.
2) Never seen a script by Jon. Nothing against him. Just reality. Butterworths & I started from a blank page.
3) 1-3 r hugely talented & all at my side.

As we see, Mangold attacks the fan with his comments and continues to do so, as another fan chimed in with the following:

A. Alexander: Don't think about it James, keep doing your work, there are more people excited about it i am sure

Mangold: Thanks, Ax. I don't mind people griping & prognosticating. But, on my watch, false info, agism & snark from so-called "journalists" is gonna be confronted directly & forcefully. IMO, these click baiters like to dish it out, but like night crawlers, can't stand the light.

Kadish, however, kept a cool head and continued with his issues about the flick:

Ford will always be Indy. The issue is whether he's still believable as the character if he's doing crazy action scenes and pushing 80 years old.

Have you read the script, Matt? Clearly not cause you don't even know who wrote it. So why don't take a rest on my show till there's a trailer or a title or something for you to be upset about. For all you know, I could be addressing all your worries.

Sir, I would love it if you proved me wrong and made a great Indiana Jones movie. I've been an Indy fan since I was a kid and its one of my all-time favorite franchises. But it's hard to get excited over what I'm seeing.

I'm sorry you are finding it hard to get excited about the film I am making, Matt. Considering you don't know the story, the script, the title, only some of the cast, nor have you seen images, if I were you, I would spend my time flipping hot takes about something that exists.

Update: Kadish is a part of the Salty Nerd Podcast, which chimed in, which saw Mangold reply as follows:

Yeah. That's a kick ass studio. Congrats on the Batman statue. And the jar of corks. So how about you let me finish my film and then bitch all you want about it in front of your vinyl bricks lit by your fancy bounce light. And maybe don't call opinion "news"..

Update #2: Mangold lets loose f' bombs and questions what is meant by being a fan:

Naw. That's not what I was saying! I was coming after a vendor selling clicks. Not fans. Sort it out, Dude.

Someone replied and included me if you care to know. The original tweet came from a site, not a fan. It had facts wrong and was nasty. I understand you think that I just shoulda let people like him spout his shit. Most days I do. Not today.

He has you tube channel and a website. He may well also be 'a fan' whatever the fuck that means. Fuck. I'm an Indy fan. He certainly is not my fan. Hardly seems a Harrison Ford fan. So what does that word mean exactly?

Screenshots of the conversation can be found below. 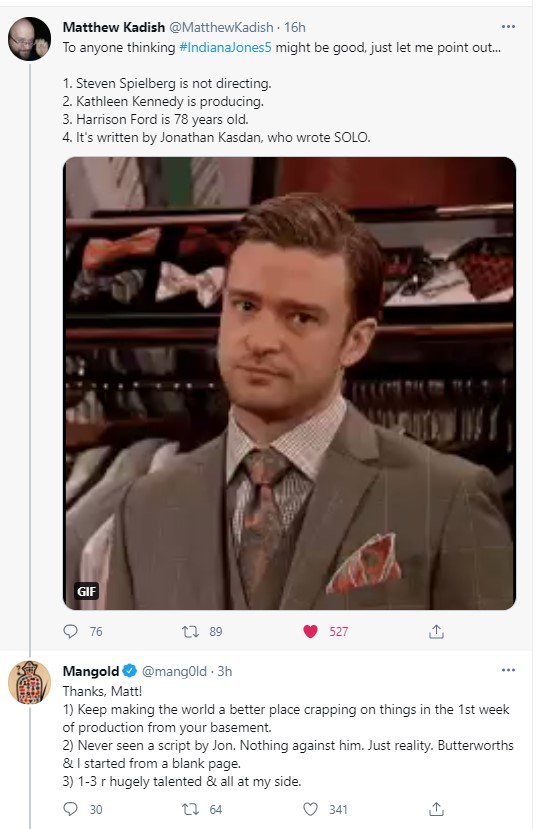 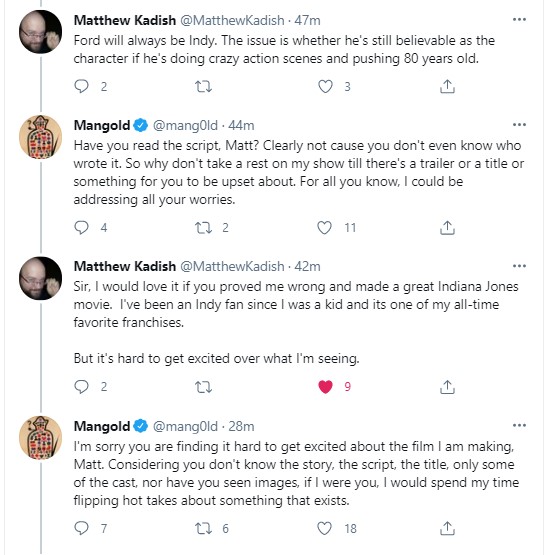 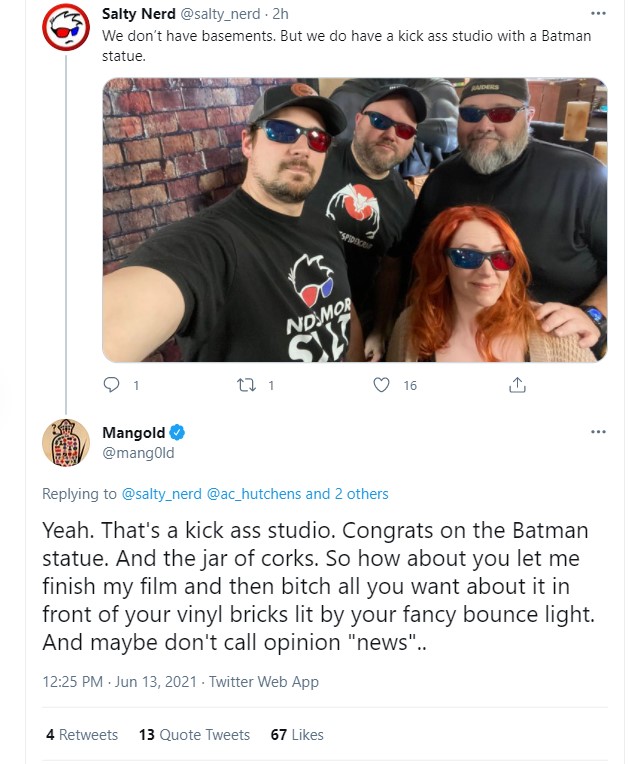 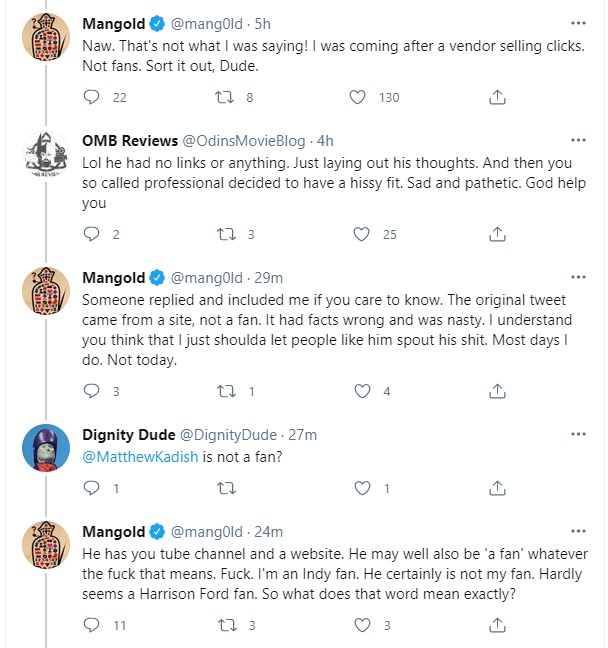