Check out the first look at the “Dead Batman” in the upcoming Gotham Knights TV series coming to The CW in the Fall.

Actor David Alexander Miller plays Batman where Batman dies and gets murdered per the official description for the show (see below).

Miller posted the following image on Instagram of himself all bloodied where the Batman mask is all broken and cracked which follows the recent trailer reveal.

It’s assumed that Batman gets killed off in the first episode where his adopted son is framed for the murder along with the kids of Batman’s enemies.

Gotham Knights is set to premiere on The CW in 2023 as part of its midseason lineup along with new seasons for The Flash and Superman & Lois.

Watch the new trailer below as well which has over 85k dislikes on YouTube compared to only 11k likes. 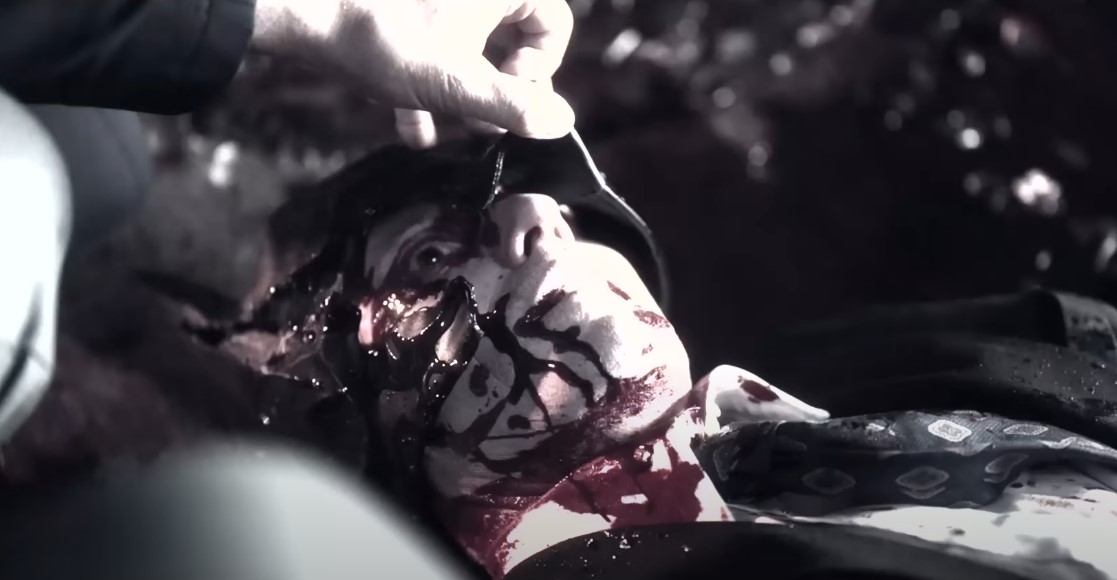 Batman is dead, and a powder keg has ignited Gotham City without the Dark Knight to protect it. In the wake of Bruce Wayne’s murder, his adopted son Turner Hayes (Oscar Morgan, “De Son Vivant”) is framed for killing the Caped Crusader, along with the children of some of Batman’s enemies: Duela (Olivia Rose Keegan, “Days of Our Lives”), an unpredictable fighter and skilled thief who was born in Arkham Asylum and abandoned by her father, Harper Row (Fallon Smythe, “grown-ish”), a streetwise and acerbic engineer who can fix anything, and her brother Cullen Row (Tyler DiChiara, “The Virgin of Highland Park”), a clever transgender teen who is tired of being polite and agreeable. With the charismatic and hard-charging District Attorney Harvey Dent (Misha Collins, “Supernatural”) and the GCPD hot on their trail, Turner will rely on allies including his best friend and formidable coder Stephanie Brown (Anna Lore, “All American”), and unlikely Batman sidekick Carrie Kelley (Navia Robinson, “Raven’s Home”). But our Knights will soon learn there is a larger, more nefarious force at work within Gotham City. This team of mismatched fugitives must band together to become its next generation of saviors known as the GOTHAM KNIGHTS. From Berlanti Productions in association with Warner Bros. Television, GOTHAM KNIGHTS is written by Chad Fiveash, James Stoteraux and Natalie Abrams. Fiveash and Stoteraux will serve as showrunners and executive produce the series alongside Greg Berlanti and Sarah Schechter. Abrams also serves as co-executive producer. Danny Cannon directed and served as an executive producer on the pilot, along with David Madden. GOTHAM KNIGHTS is based on characters created for DC by Bob Kane with Bill Finger.