This coming Saturday, March 30, will see the DC Universe app be available for free in honor of 80 years of Batman, which will also include the first month for only 80 cents. For 24 hours fans can view comics, live action and animated films and TV series highlighting the hero.

Check out the full announcement:

First month of DC UNIVERSE Digital Subscription Service only $0.80 for a limited time

BURBANK, Calif. – March 22, 2019 – On Saturday, March 30 DC UNIVERSE will open its digital doors to Batman fans for a day of free live action and animated films, TV series and comics. The one day stream free event is part of DC’s year-long festivities that commemorate 80 years of Batman and recognize the Dark Knight as a symbol of courage, bravery and perseverance for generations of fans. Everyone in the US can get in on the celebration hosted by DC’s first-of-its kind digital subscription service by visiting dcuniverse.com or by downloading the app for free at the Apple App Store, Google Play Store, on Roku, Android TV or Amazon Fire TV.

The celebration begins at Midnight EST, Saturday, March 30th - exactly 80 years to the day Batman first stepped out of the shadows of Gotham City in DETECTIVE COMICS #27 - and will run 24 hours, until 11:59 PM EST. From the Caped Crusader's origin in Frank Miller's landmark "Year One" to Tim Burton's 1989 movie blockbuster to the epic Batman: The Animated Series, you'll be able to binge hundreds of the greatest superhero stories of all time, featuring the most iconic character in pop culture history.

And, if 24 hours of Batman binge-watching is not enough, DC UNIVERSE is supporting the celebration with a special offer. The first month of DC UNIVERSE will cost only $0.80 cents for new members who sign up between March 29, 2019, 12:01 EST and April 4, 2019 11:59pm EST. The special offer is available in the US at www.dcuniverse.com. After the first month at $0.80 the monthly subscription price will renew at the standard rate of $7.99 a month.

DC UNIVERSE is highlighting many of the most iconic live action films and animated movies and series that showcase decades of the Dark Knight’s heroism. From the animated series Batman: Beyond to a full selection of Justice League animated classics, as well as live action films that illustrate the many facets of Batman’s character and back story including Tim Burton’s groundbreaking Batman and Batman Returns and Joel Schumacher’s Batman & Robin.

Available film and TV titles include:

Fans will be able to access a curated selection of Batman comics, many of which inspired the films and TV series that are available during this event. One-of-a kind art, captivating characters, and storylines have been digitized so that they can be enjoyed anywhere, on more devices than ever. The DC UNIVERSE comic reader includes access across devices from a smartphone to a 10-foot screen, in vivid detail.

Among the comics included are classic storylines like "The Laughing Fish", "JLA: Tower of Babel", "Superman/Batman: Public Enemies", "Under the Hood", "Batman and Son", “Flashpoint”, “Superman/Batman: The Supergirl from Krypton” and writer Scott Snyder and artist Greg Capullo's bestselling "The Court of Owls."

Available Comic Books and Series include:

Fans can also join in on social media using the hashtag #Batman80 and #LongLiveTheBat. Visit www.Batman80.com for the latest news and updates.

Viewers enjoying the stream free event will not have access to the DC UNIVERSE community or shop where exclusive merchandise is sold. Those areas of the service are exclusive to DC UNIVERSE members and are not included.

Launched on September 15, 2018, DC UNIVERSE is available today at $7.99 per month or $74.99 annually (plus taxes, where applicable). To learn more and purchase today, visit dcuniverse.com and follow DC UNIVERSE on social networks including Facebook, Instagram and Twitter. 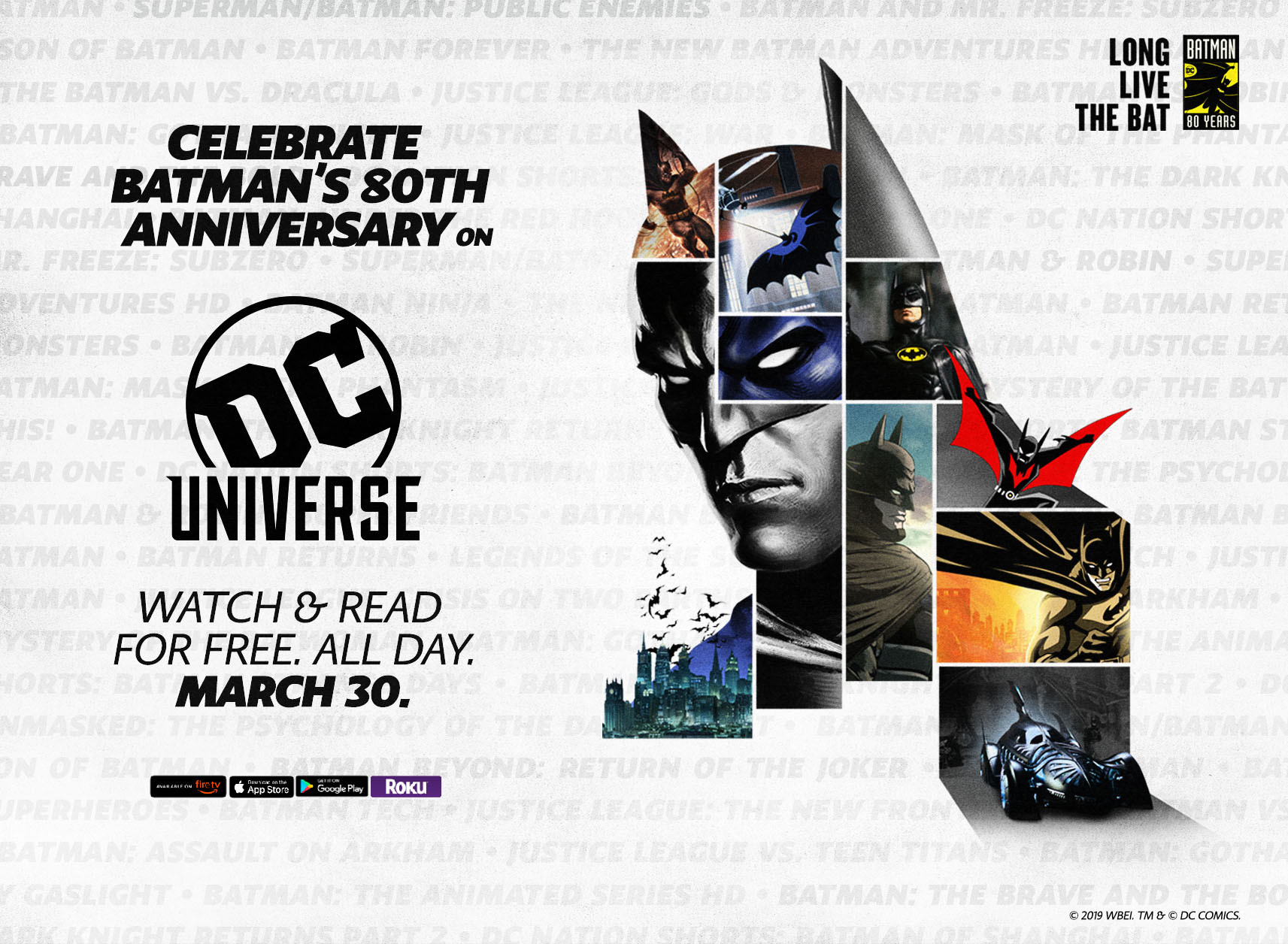