While we wait for the next incarnation of the Joker to hit the big screen with Jared Leto in Suicide Squad, check out what happened to Heath Ledger’s Joker in the scene in The Dark Knight when Batman saved Rachel.

The scene wasn’t featured in the movie, which became a big plot hole, but a Redditor posted a page from The Dark Knight script as well as what looks to be an image still from the scene that never made it into the film revealing what was supposed to go down. 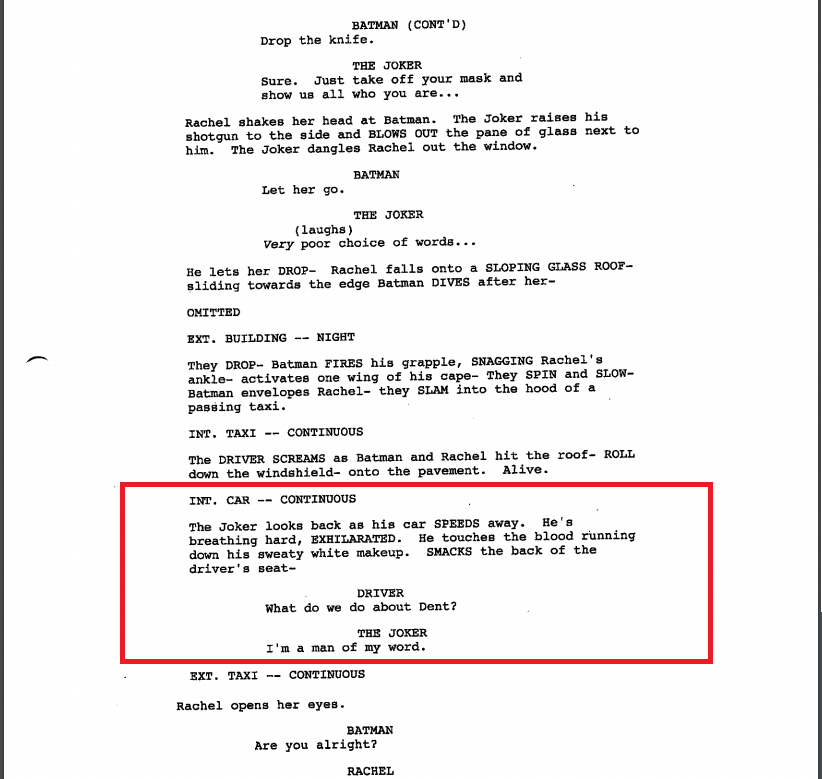 The Justice League movie is slated for a 2015 release with a script from Will Beall; however, the movie still has no director attached.

How about the James Bond Skyfall director Sam Mendes?

Skyfall already has had quite the opening, Sony’s largest ever I believe, so would Mendes have any interest in the Justice League movie?

The Collider recently spoke to Mendis and makes it a point that the comic book movie genre is making billions and is huge right now, in addition, it’s not slowing down anytime soon.

They ask, “Is the comic book genre something that if Marvel came to you or Warner Bros came to you with Justice League, is that something you would sit down and say ‘I might be interested in this?'”

“I’ve never thought that was in my comfort zone,” Mendes said. “But when I watch – I went with my son to see The Avengers and loved it – but I just looked and it and thought, you know he’s done it brilliantly, Joss Whedon, ‘How on Earth, where do you stop?’

“Because for me, what I love about Bond is that it has a basis in reality, everything is a real physical special effect, and it’s supplemented by physical effects. But when you’re working the other way around and your basic storytelling, the majority of storytelling is on blue screen, I think I would be lost, I’ve gotta be honest.

“It’s just a totally different world, you have to work at a different speed, different pace, there’s much much more in the conceptual art world, much more privies. And it’s not what gives me pleasure as a filmmaker. I love real people, real actors in real spaces, and that’s what I feed off, that’s what drives me, and I think if you take that away, I think I would find it very difficult.”

The Collider then reiterates the question, with Mendes responding as follows.

“I don’t see it, but then you know, it depends on how it’s handled,” Mendes offered. “There are some comic book movies like The Dark Knight for example or the second X-Men movie, which didn’t feel like they existed in an entirely fantasy universe. They were inspiring to me because I thought that somehow you could see how they are possible to make.”

And it does seem as if Warner Bros. is keeping with that realistic tone and theme in the Man of Steel, which is said to be a lead in to the Justice League movie.

Mendes can’t be ruled out completely.