Max Landis Says Spider-Man Is Back With Marvel Studios

We might have some news that will bring smiles to lots of people's faces as apparently, Max Landis has tweeted that Spider-Man is coming back to Marvel Studios.

The following screen grab has Max Landis, writer of Chronicle, stating: "crazy about Marvel getting Spider-Man back, that's gonna be bonkers."

Followed by a third: "Ha Ha 5 months from now this is all gonna be real intersting."

It's unknown if the deletes are meant to be a joke or real, as Landis has other tweets suggesting he'll be playing Gambit; however, it seems Landis deleted the tweets referencing Spider-Man to Marvel.

It's possible the news of Spider-Man going back to Marvel could be true as reportedly Sony has been having financial troubles. Back in October of last year, it was stated Sony could be selling off its entertainment division. 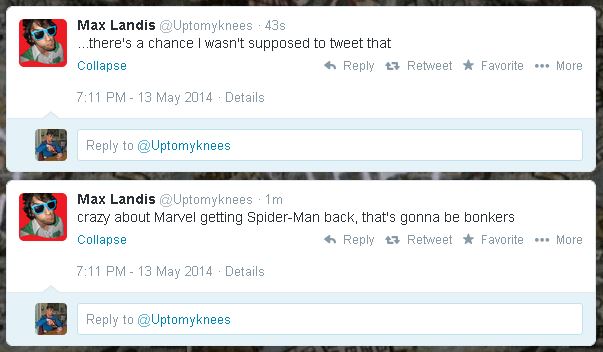