HELLRAISER #1 SELLS OUT
IN ONLY 3 DAYS! 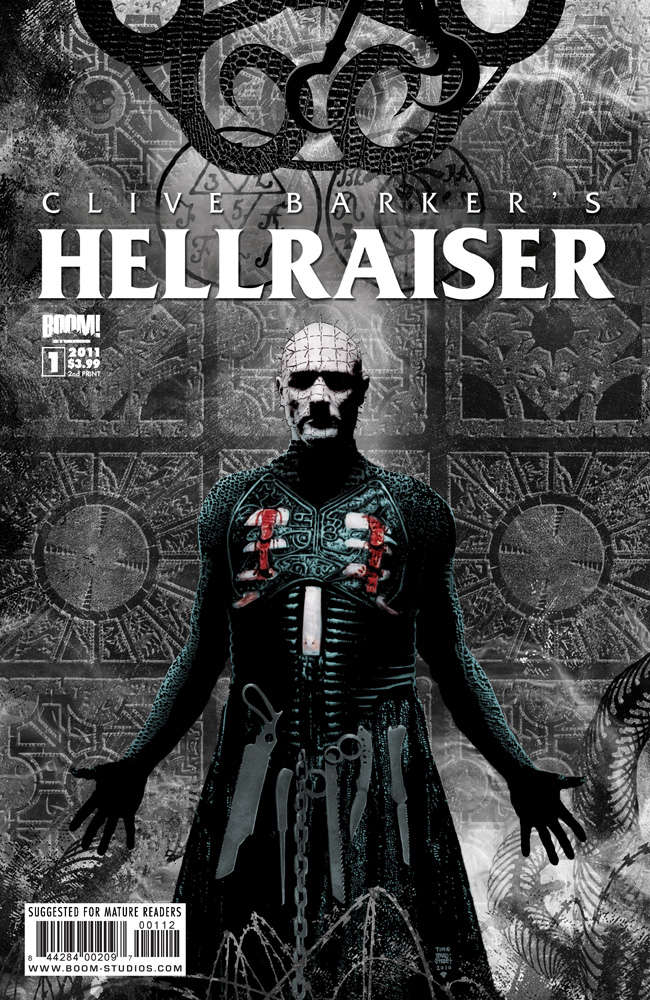 “I can’t wait to read the rest of this series and see what hells Manco, Monfette, and Barker have to show us.” – Ain't It Cool News

March 29, 2010 - Los Angeles, CA - BOOM! Studios announced today that Clive Barker's HELLRAISER #1 is completely sold out! In a historic promotion, BOOM! simultaneously released an all-new, all-original, free and completely sharable PRELUDE TO HELLRAISER #1 PDF (check #HellraiserPrelude on Twitter to obtain a copy) which aided in the dramatic sell out of Clive Barker's HELLRAISER #1 within the first three days of release! BOOM! Studios also announces today that Clive Barkers HELLRAISER #1 will be going to second print and is available to order now through Diamond Comic Distributors with the following Diamond Code: FEB118159, as well as through Haven Distributors.

Fans should keep in mind, while Diamond Comic Distributor and Haven Distributors are completely sold out, first printings of Clive Barker's HELLRAISER #1 may still be found at the local comic shop nearest you. Not sure where to find your nearest comic retailer? Please use www.comcicshoplocator.com.

“From everyone in the HELLRAISER creative team and from everyone at BOOM! – thank you for making Clive Barker's HELLRAISER #1 a sweeping success,” says BOOM! Studios Editor-in-Chief Matt Gagnon. “But we're not stopping there, this is just the fuel that drives us to work even harder at making the HELLRAISER ongoing series the best it can be!”

BOOM! Studios also received tremendous support from retailers both domestically and internationally for the release of Clive Barker's HELLRAISER #1:

“The new HELLRAISER comic has been outstanding with many new faces coming in to see the new material by Mr. Barker,” says comic shop owner Gary Dills of Laughing Ogre Comics in Virginia and Ohio. “I am not shocked that this book has sold out so fast, and am glad that BOOM! will be keeping copies of #1 flowing for the many Clive Barker fans yet to experience HELLRAISER #1. BOOM!'s promotion of the comic outside the normal channels in conjunction with ComicsPRO store fronts was a great vehicle for driving new faces to stores and I think that they should be applauded for working outside the traditional comic media to promote this work!"

“Well played, BOOM! Studios for producing a digital comic, that actually created new customers for the local comic shops. BOOM! Studios marketed outside the traditional comic book fan sites and drew in valuable new faces. This is the type of savvy street smart marketing that the direct market needs from our Publishing partners in order for us all to thrive and grow.” says store owner Lawrence Doherty of Larry's Wonderful World of Comics, Shows, Skate, Toys, Gaming in Massachusetts.

“BOOM! Studios positive “Comic Shop Friendly” promotions have trumpeted Clive Barker's long awaited return to Hellraiser and could not be more successful! The only surprise was that it took two days in stores to sell out.” says store owner Ralph DiBernardo of Jetpack Comics in New Hampshire.

“Clive Barker's HELLRAISER takes a horror icon in a new direction that has already, in a single issue, piqued the interest of both longtime fans and new readers alike. This is one to keep in stock for the long haul,” says store owner Thomas Gaul of CornerStoreComics in California.

“Reading this comic brought me back to when I first saw the movie," says store owner Steve Clifton of Clifton's Comics & Games in Ohio. “As chilling as the original, I can't wait for more!”

In a historic online promotion never attempted by a comic book publisher, BOOM! Studios offered an all-new all-original, completely free and shareable 8 page PRELUDE TO HELLRAISER #1 PDF, written by Clive Barker with Christopher Monfette and drawn by Leonardo Manco (HELLBLAZER). The free PDF could be found hosted by some of the most popular comic and horror news websites online. Buzz circulated through the online community, especially through Twitter as followers could locate where to download the prelude PDF by searching the hashtag #HellraiserPrelude. All these efforts translated into a dramatic increase in sales causing Clive Barker's HELLRAISER #1 to sell out in its third day, sending the hit horror series into second print!

“I'd like to personally thank the comic retailer trade organization ComicsPRO and our friends at Diamond Comic Distributors for helping make such a far-fetched concept like an all-new, all-original PRELUDE TO HELLRAISER #1 PDF a reality,” says BOOM! Studios Marketing Director Chip Mosher. “We couldn’t have done it without the support of both organizations and share the success of this sell out with them both.”

Since its release, Clive Barker's HELLRAISER #1 has garnered critical acclaim from reviewers across a wide spectrum:

“I can’t wait to read the rest of this series and see what hells Manco, Monfette, and Barker have to show us.” – Ain't It Cool News

“A Tour De Force For The Twisted” – Major Spoilers

“If there was an Eisner category for creepiest opening two pages, HELLRAISER #1 would be the runaway favorite...” – Newsarama

“Manco’s artwork mixed with the storytelling of Barker and Monfette has me geared up and ready for more.” – Comic Monsters

“HELLRAISER #1 is a flawless tale told on an operatic canvas.” – Pop Matters

“The comic is everything that I hoped for and more. It’s the HELLRAISER story that fans have been waiting over two decades to read! Don’t miss out!” – Hypergeek

HELLRAISER #1 second print (Diamond Code: FEB118159) contains the first installment of the epic ongoing horror series written by master of horror Clive Barker with Christopher Monfette, and featuring sensational art by Leonardo Manco (HELLBLAZER). The first printing shipped with two covers in a 50/50 split and special 1-in-50 incentive cover drawn and signed by Clive Barker himself.